The shotgun shown here is not for sale.  It belongs to a fellow collector who generously allowed me to photograph and share it with you.

When the Confederacy was threatened with invasion by Federal forces in 1861 so many Volunteers flocked to her standard that many were turned away for lack of arms.  The different state governments scoured the countryside in search of sporting rifles, old flintlock pistols and shotguns; any weapon that could aid in arming their Volunteers.

In a short and to the point note dated May 18th, 1861 Confederate Secretary of War wrote to Mississippi Governor Pettus, “Can you give me two regiments for twelve months, armed with heavy double barrel shotguns?”

Virginia Colonel (at this time) Jubal A. Early writes to Virginia’s Adjutant General, “There are now eight companies of cavalry here, well mounted and in fine condition, but for the arms necessary for them, which are mostly wanting.  Two companies are armed with double barreled shotguns, and two more will soon have them.”  In a following letter Colonel Early writes “I have directed them to get all the double barrel shotguns they could.”

In July of 1861 Kentuckian Wm. T. Withers wrote to the Confederate Secretary of War, “Many Companies of cavalry have tendered their services, who propose to arm themselves with shotguns and revolvers.”

The Confederate Cavalry’s extensive use of shotguns is frequently attributed to the Confederacy’s severe shortage of firearms early in the war.  However, this is not the only reason.  As early as August of 1861 the shotguns long term use was foreseen; Captain of Ordnance Wm. R. Hunt wrote to the Secretary of War from Memphis, recommending that contracts be let for 10,000 sword bayonets for double barreled shotguns.  Nearly a year later Hunt wrote to Secretary of War J. P. Benjamin, “Colonel Forrest, the most efficient cavalry officer in this department, informs me that the double barrel shotgun is the best gun with which the cavalry can be armed.”  A more qualified endorsement of the shotguns use could not be desired; it was the most efficient short range arm used during the war.  As late as July 24, 1863, South Carolina Governor Milledge Bonham opines to Confederate Secretary of War Seddon that South Carolina had turned over all of her shotguns to the Confederacy.

The Confederate Cavalry continued to employ the shotgun for the remainder of the war though with less frequency.  The attrition of close-in combat took its toll; cavalrymen began to skirmish at longer ranges and eventually to fight primarily as mounted infantry.

Where are all those shotguns?  I suspect that there aren’t many surviving that had been converted for military use because a sawed off shotgun was of little value after the War.  One could hunt game with a rifle or musket, or even a full length shotgun but, a sawed off shotgun is only good for one thing, killing men.

The only reason this one survives is because it was picked up as a souvenir of the skirmish between Kilpatrick’s Cavalrymen and Confederate Cavalry under “Grumble” Jones and Beverly Robertson in Monterey pass after the battle of Gettysburg.

The shotgun in its original configuration is of British manufacture.  It has been shortened to a carbine length.  A sling swivel similar to the one found on Richmond two band Carbines screws into the butt stock; another is attached to the upper ramrod channel. The sling is original to the shotgun.  Half of a period silver quarter serves as a front sight blade.  Its original wooden ramrod has a ball puller permanently affixed to one end and a forged iron ferule reinforcing the opposite, swelled end. 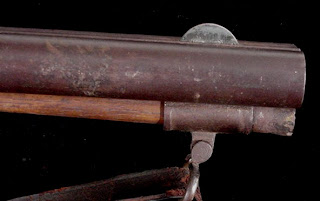 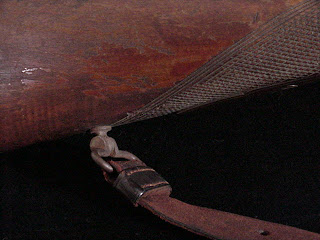 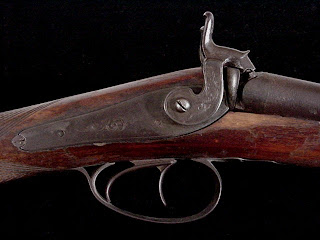 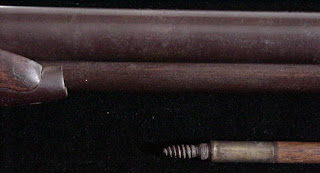 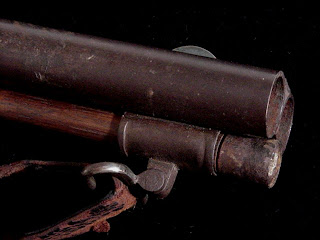