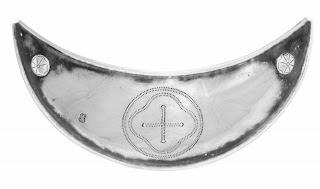 David Hughes grew up in the hills north of Fort Pitt.  As a youth at the family camp on Conewago Creek he often herd stories from his parents and grandparents about the French and their Indian allies
who traveled up and down that creek in the eighteenth century.  From that point on young David was hooked on the early history of our great country.

After thirty five years teaching shop in the public school system of Hampton Township David retired and began teaching adult education classes in the construction of flintlock rifles, eighteenth century penmanship and eighteenth century crafts.  One of his students in night school was a very talented Ken Gahagan.  Ken was profiled in a recent issue of FLINTLOCK.  At about the same time David met Fred Threlfall.  Fred was creating beautiful art work and historically correct maps.  His work can be seen at www.paramountpress.com.  Fred was also lecturing  at historic shows and sites.  The three new found friends got along well and shared many common interests.  They appreciated each others work and began to participate in the same shows.  At that point Fred christened them ye Honest Brothers.

As a team, ye Brothers display and demonstrate a number of eighteenth century crafts.  David and Ken jointly produce historically accurate period furniture and woodwork.  They create beautifully crafted pieces designed and executed in the finest eighteenth century manner.  Whether it’s a lap desk, highboy, or a leather covered box, their attention to detail and historic accuracy is unsurpassed.  David, Ken and Fred have produced a writing desk for the CLA auction in 2006.  David and Ken designed and built the
walnut desk and Fred produced replicas of original eighteenth century maps that line the inside. 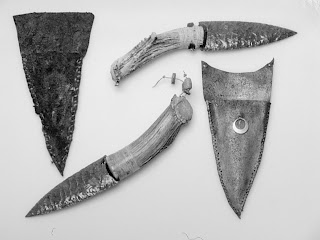 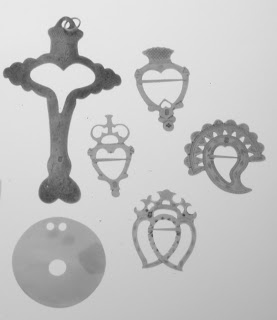 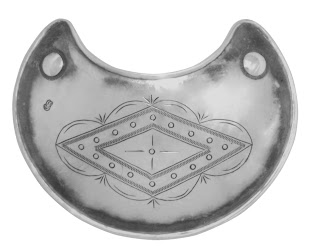 He also does copperplate or eighteenth century writing.  His trade silver pieces are copied from period originals and done in a fashion consistent with these originals.  He is constantly researching new examples to replicate.  A variety of gorgets from sights across eighteenth century America are available.  Other silver trade items are meticulously recreated. 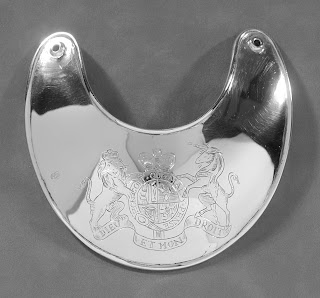 Previous post of Dave's work are a pistol, hair plate, cross and cones for a rosary, and loading blocks.

David and ye Honest Brothers can be seen at Cook Forest, Fort Pitt, Fort Frederick, Connor's Prairie and the CLA Show in Lexington.