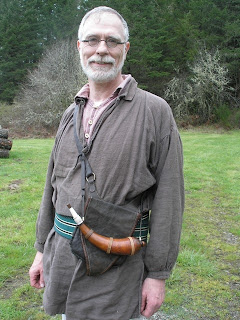 I’m a relative newcomer to the sport of black powder shooting, having started in 2006 when I purchased a Lyman Great Plains rifle kit to assemble. My “first” horn was one I assembled from a kit, which was basically installing the mahogany base plug and securing it with brass pins. I did customize the horn, carefully filing four flats on the tip, afraid the whole time that I would break through. In May, 2007, I took a one day workshop on making French and Indian War period powder horns, taught by California horner Steve Vance. This one day class was a turning point in my life as I fell in love with making powder horns. My first horns were made for my two children to use when at our black powder club. Once you’ve made one though you cannot stop and I started making horns for family and friends, trying different techniques and improving my art. 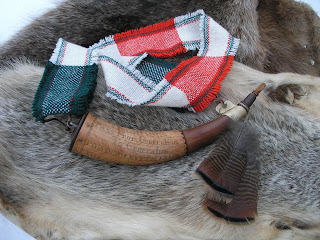 What I enjoy most about working with horn is discovering and bringing forth the shape that is hidden within. I like to tell people that a horn will let me know what it wants to be and my job is to make that happen. Sometimes I’m successful and achieve what I strive for, bringing out the beauty in a horn. 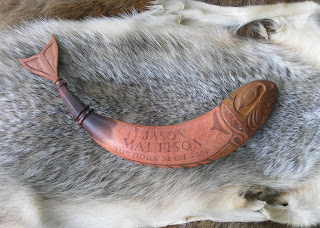 One of the most inspired horns I have done was for a customer in Alaska. He wanted the horn to be a Chinook salmon, and after some discussion we settled on a Northwest Coastal Indian theme. I used a rather extremely oval horn with a lot of curve and fitted it with a cherry base plug. No attempt was made to round the horn and the oval cross-section was kept. The base plug was carved into the head of a fish with Inuit design. Native designs also were engraved on the horn body and the spout plug was a fish tail, also carved from cherry. In 2009 I took the horn to Dixon’s Muzzleloading Fair in Pennsylvania, entering it into competition. The horn was quite a sensation at the fair and it came away with three ribbons. 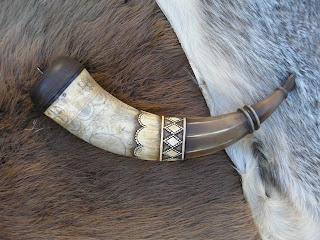 I continue to improve my craft and explore new ways and styles with my focus currently being the Southern banded horns of Virginia and North Carolina. I don’t like to recreate any particular original horn, but instead take inspiration from a variety of originals to incorporate into my design. I look for the unusual, some aspect of a horn that one doesn’t normally find, yet still retains the character of the style. 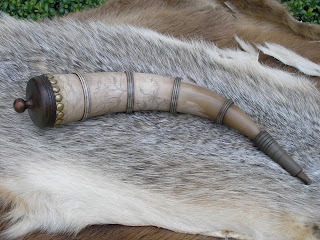 An example is an engraved North Carolina banded horn I recently completed. Engraving is not something normally found on the banded Southern horns, yet the 1803 original was engraved with a floral design. I replicated that engraving on my horn along with a scallop design from another Southern horn. 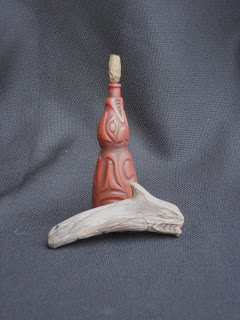 I am a member of the Honourable Company of Horners, having joined after finding an application to the guild in an order of horns I received from John and Linda. At Dixon’s, in 2009 and again in 2010, I spent most of my time there at the HCH table, meeting a lot of new and old friends.

I’m also a member of the Horner’s Bench, an internet forum dedicated specifically to horn work. This is one of (if not the) best online forums available. The members all share a unity of purpose: to freely promote working with horn and sharing their knowledge. It definitely is a worthwhile forum to be a part of.

Copy and photo supplied by Linda Shorb at Powder Horns and Friends.
Posted by Contemporary Makers at Tuesday, January 10, 2012