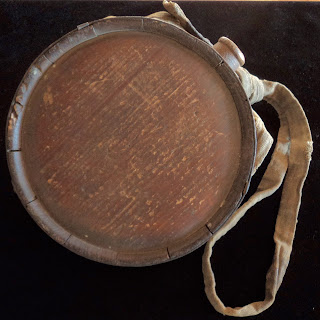 During the course of the War millions of canteens were manufactured in the South.  Every man in the Southern Army carried a canteen and most would go through several by War’s end.  To supply this need, canteens were manufactured at Confederate government facilities, but the government facilities could supply only a small fraction of the canteens required to equip the Army.  In order to meet the pressing need for canteens the Confederate government purchased the vast majority of canteens from private manufacturing concerns.  The most widely used Confederate canteen was made of wood because any cooperage could easily convert to the manufacture of wooden canteens as they required exactly the same skills as barrel making.

Often, when a soldier went for water he carried and filled as many canteens as he could so that his comrades could remain on the battle lines or in marching formation.  When the filled canteens were returned, each soldier needed to be able to pick his own out of the group.  Because of this, the vast majority of Confederate canteens have something carved or scratched into the canteens surface.  These carvings range from simple initials like the “HT” and a simple cross cut into opposite faces of this canteen.

The canteen shown here is the classic Confederate wood drum canteen, but it is truly remarkable in that it remains totally complete.  It is slung with an infantry length, web sling that has been wrapped and tied into a knot in order to make it serviceable for a cavalryman.  The cavalryman needed a short sling because he hung his canteen off of his saddle.  The sling is fastened by means of a bone button passed through a whipped eyelet.  There is only one eyelet, its positioned at the very end of the sling; no provision was made for adjustment, hence the knot tied by the cavalryman was the only way to shorten the sling.  Two tin cross straps hold the sling in place on the canteen.  The canteen is completely original, with the exception of the thread holding the button onto the strap.  It is an exceptionally nice complete, cavalry canteen.

The canteen remains very tight, but for the crack around the spout it would hold water as well as when it was made, and the sling is strong enough to carry it, even if it was full of water. 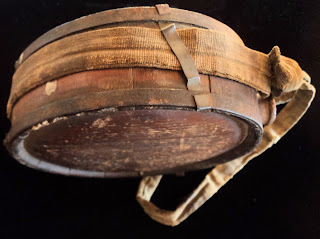 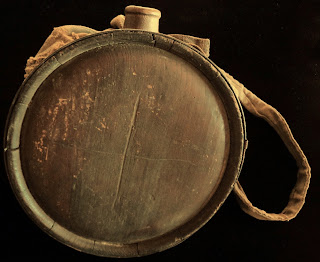 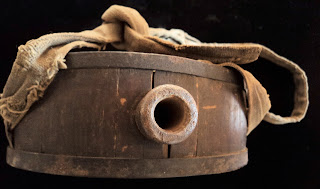 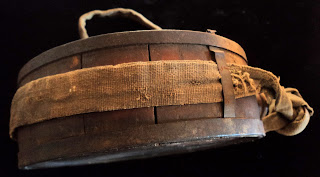