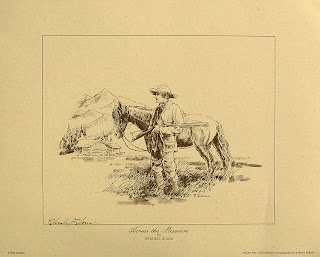 At our fall shoot 1983 at Friendship, Indiana, I was called before the board of directors of the National Muzzle Loading Rifle Association. As a part of the next years fifty year celebration they wanted an art print or prints to raise money for the Association. Western Artist David Wright, fairly new on the rendezvous scene at that time, made a bid and was considered for the art work. He was on our magazine Muzzle Blast staff. An artist from Philadelphia, Pa. came in, pushed me aside, laid out his art prints and they were fairly good! He was not one of our Association members! I had just a few sketches with me! A long boring afternoon, the directors couldn't seen to make up their minds. I could hear plenty of activity up in the primitive area, longrifle gun fire, yelling and singing a faint sound of live Bluegrass music. Plenty of cold beer being drank and I needed one bad! Finally my old friend Doctor Eldridge Baker, then vice president of N.M.L.R.A. and a director, slammed his fist down on the big conference table saying, "Hershel House has been a member here for eighteen years. He has taken part, since the beginning of the development and success of the primitive camp and rifle range. Hershel donated one of his rifles as a prize for the valley aggregate 1974. Also winning that event twice, later on. Also building a hundred or more longrifles for our members, many are in use on our range today! He is the one who deserves to do the prints." Other directors said "OK." We decided I would do four pen and ink drawing depicting our different activities! I pondered all fall and winter what to sketch. As time was running out in late March, I finally sat at my kitchen table, did all four in one afternoon and evening. In the middle of this my wife, Dark Moon, washing dishes, cut her hand badly on a broken glass. Had to take her to our doctor, got her hand sewed up! Took my four sketches to Grey Stone Press in Nashville and the were approved. Grey Stone did and excellent job, printing a five thousand series as a package deal! I had suggested a two thousand series as we didn't have near five thousand members but our board of directors wanted to make big bucks, so I had to sign and number twenty thousand print, which took about a week and a half. My left hand cramped and I had bandaids on three fingers. Dark Moon was a big help, she would hand me four prints to be signed and numbered, she slipped them into their folder, handing me four more. Loaded up three hundred pounds of prints, headed to Friendship in my old Ford. Collected my two thousand dollars what I had charged and was agreed to by the Association. That next summer 1984 at our fifty year celebration shoot, they had a NMLRA small booth set up to sell bi-centennial items. I was supposed to set there and sell and autograph sets to member customers each day. Being more interested in longrifle competitions up in the holler, I hid out! The print sets did sell fairly good, some used as shooting prizes and over a number of years the five thousand series did sell out. The original sketches are framed and hang in our NMLRA Museum at Friendship. A few years back our board of directors said if I would not do another numbered series, it would be fine to print up and sell a few more sets. My friend Barry Embry owner of Embry's Impressions did a fine job on the same color heavy textured paper. 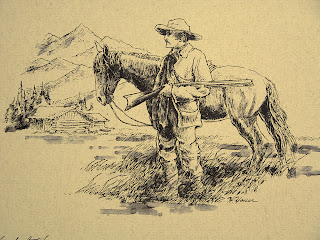 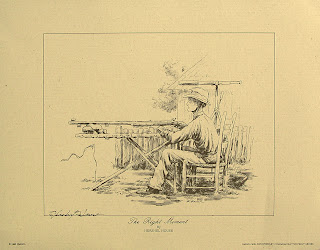 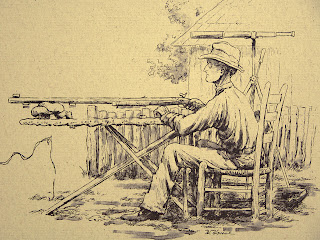 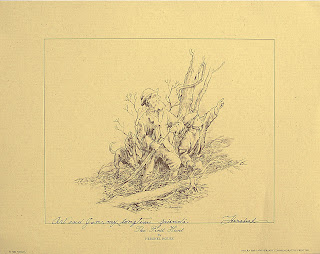 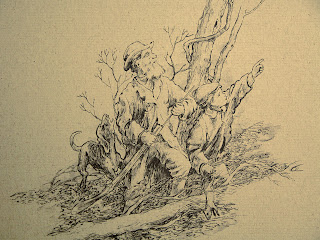 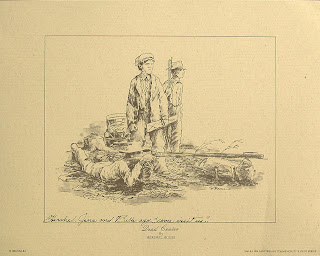 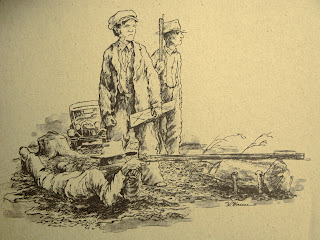 Drawings and copy by Hershel House.
Posted by Contemporary Makers at Wednesday, December 14, 2011