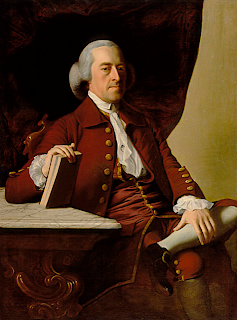 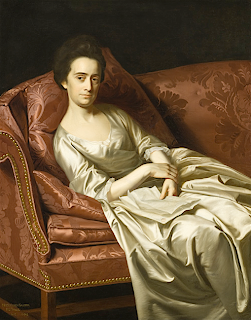 "Portrait of a Lady", 1771
John Singleton Copley was colonial America’s first great painter. Everyone who was anyone wanted to sit for a portrait by him. This woman sat for hers in 1771 - Copley painted the date on the letter she holds. Other that that, we know very little about this woman, not even her name or where she lived.
Copley was famous for his ability to paint the luxurious fabric and lace of his sitters’ clothing. This woman’s shimmering silk gown is no exception. To modern eyes, she seems quite dressed up. But colonial-era viewers would recognize this as a casual outfit worn only at home among family - the equivalent of a dressing gown today. Confirming the informal setting, she wears no jewelry, and leans back on her cushion as if caught in a moment of rest.
Upholstered furniture like this couch was extremely expensive at the time. This may give a clue to the sitter’s wealth - or may not. Copley was known to offer prop furniture, and even clothing, in his portrait studio.

About the Era: Although the thirteen colonies that would constitute the United States of America were founded by several different nations, by 1763 (the end of the French and Indian Wars), the British controlled most of North America from the Atlantic Ocean to the Mississippi River. In many respects the American colonies functioned like an English province. Culturally they were largely British; from interior design and dress to painted portraits, wealthy colonists emulated the London fashions of the period. However, there was often a time lag, as examples of the finest British furniture, household goods, and decorative items such as paintings had to be transported across the ocean.


At first the only trained artists and artisans in the colonies were emigrants from London who thought fame would be easier to achieve in the less competitive atmosphere of Boston or Philadelphia. By the end of the eighteenth century, this traffic had reversed somewhat, as American artists went to London for their training. Portraits were the most popular genre, since British citizens everywhere wanted visual records of their families and heroes. Historical and literary subjects, such as those by Benjamin West, were usually only painted in London; their appreciation required a more educated audience than was the case with many colonists. The pervasive influence of Britain would continue to affect the development of culture in the United States long after the Revolutionary War had severed the Crown’s political authority.


Copy and photos from the LACMA.
Posted by Contemporary Makers at Sunday, December 18, 2011