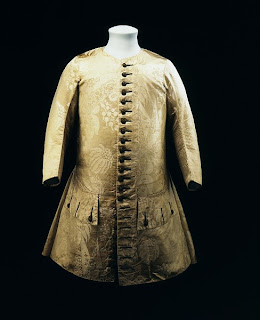 Waistcoats were part of the three-piece ensemble that made up men's dress in the 18th century. At the beginning of the 18th entury, waistcoats often had sleeves and were usually as long as the coat that was worn over them. This example is unusual in that the silk has been used for the back as well as the front. Normally, the expensive, decorative fabrics were reserved only for the front. Waistcoat backs were usually made of fustian (a blend of cotton or linen) or some cheaper fabric, since the back was never seen in public.

The waistcoat is hand-sewn and lined with fustian. The buttonholes are sewn with silver thread.

The monochrome colour, simplicity of weave and scant use of metal thread indicate that the waistcoat was intended for informal wear. It would not have been worn at court or to formal public events.

The silk is a damask weave in a large pattern of trailing leaves and abstract geometrical shapes. (Damask is a type of weave whose effect depends on the differing play of light on its pattern surfaces, which alternate between the smooth face and the contrasting reverse of satin weave.) It is similar to patterns designed for damask by the silk designer James Leman in 1708. These patterns by Leman and other designers are known as 'bizarre silks'. 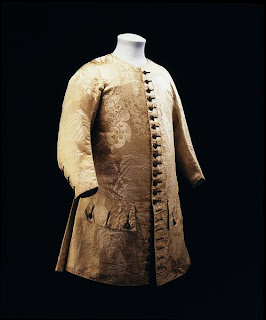 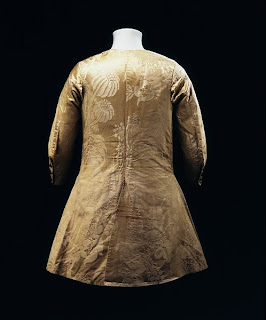 Copy and images from the Victoria and Albert.
Posted by Contemporary Makers at Saturday, December 03, 2011