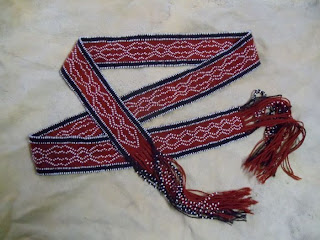 My version of a strap from a bag in the British Museum. 2" x 48" with about 7" of fringe on each end. 70 strands of very fine 2-ply yarn and tightly woven. Madder dyed red, and black yarn with approx. 3800 white glass beads woven in.

The bag this strap comes from is typical of bags that start showing up in the 3rd quarter of the 18th century and continue thru the 4th quarter of the 18th century and early 19th century, from the Great Lakes region. The bag was originally in the Timothy Pickering (1745 - 1829) collection and was acquired by Sir A.W. Franks. It was eventually acquired by Henry Beasly and in 1944 his wife presented it to the British Museum (see JCH King - "Thunderbird and Lightning") . It is not known when or where Pickering acquired this bag but as Sec. of State for Washington and Adams he would have had contact with many people that were working with Indian tribes and he himself presided over the negotiations with the Iroquois and the 1794 Treaty of Canandaigua. Before that he had settled in the Wyoming Valley of Pennsylvania in 1787. Although a tag from 1932 that is on the bag states, "Plains Indians, Souix Ohio Valley" it would seem a bit questionable as being direct information due to the glaring geographical error.