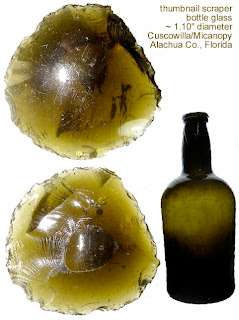 I found this thumbnail scraper made from bottle glass in a backyard garden in Micanopy, Florida. It was among clay pipe stems and bits of crockery scattered in the soil.  I have not seen another, though I have read about such tools.

Micanopy was the first American settlement, founded in 1821, after Florida was ceded to the USA by the Spanish. The American settlement and fort was preceded on the site by the Seminole village of Cuscowilla, built at the crossing of two ancient Indian trails.  William Bartram visited Cuscowilla in 1774.

My guess is that this bottle glass tool dates to early in the contact period, since the Seminoles would have had access to metal tools later.

The glass is "black glass" which is actually a dark olive-green or olive-amber.  Black bottles such as the one in the image would have been typical utility bottles from the late 1700s through the 1830s.  In fact, they are known as "fort bottles" in Florida because they are found around Seminole Wars forts and encampments.

Supplied copy.
Posted by Contemporary Makers at Sunday, May 08, 2011