I saw a rifle years ago, hanging on the wall of my friend’s gun room. It looked very different from anything I’d ever seen. Was it Dutch influence? German-American? Where was this gun made? There is no signature, no indication of who made it. While the gun looks really early, the design of the buttplate and guard tells me it falls between 1770 and 1780.
Over a period of two years, and many visits, I managed to make a drawing, make patterns off the hardware, and take a series of photographs of the gun, inside and out.
For my copy, I used red maple, which I believe the original stock is made of. The rifled barrel is a .54 caliber by Bob Hoyt. The lock is the Davis ‘early Colonial’, a massive and exceptional sparking lock. The brasses I made pattern off the original, and had them cast.
Several features stand out on this piece. The most obvious is the large rounded buttstock and huge flat cheekpiece. The wrist is round, and stops right where the comb meets the wrist. This makes for an ‘inflated’ looking buttstock. The forestock is very slim, in contrast to the heavy, rounded butt. The sideplate is very unusual, similar to some I’ve seen on Hudson Valley fowlers. Another strange piece of hardware is the rear entry thimble, as it transitions from forestock to grip without the customary bulge. The carving around the tang and entry pipe is very simple and folksy. Dutch? Pennsylvania?
On the bottom of the butt is a piece of scabbed on wood, and on the top of the comb, there is a peg attempting to keep the stock from checking more. I believe the original gun was built with this piece pegged and glued in place, not a repair, but the saving of a fine piece of wood.
While there is nothing fancy about this gun, it has a real presence. It is dark, almost ominous in it’s simplicity. That everything about it is still a mystery just adds to the aura. During this build I had many conversations with friends about this gun, speculating, theorizing where this gun might have been built and by whom. 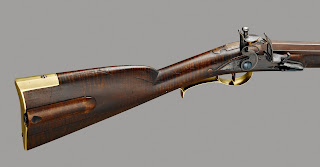 Photographs by the incredibly talented gunbuilder and photographer, Jim Filipski.
Copy by Tom Curran.
Posted by Contemporary Makers at Thursday, May 05, 2011