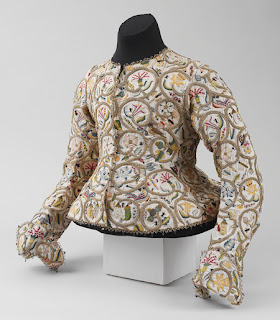 Richard Martin likened this woman's jacket to "seventeenth-century still-life painting in its global outreach and analytical approach, [suggesting] both abundance and taxonomy." Indeed, it is a veritable catalogue of the contemporary flora depicted in embroideries of the late Tudor and Stuart eras: roses, lilies, borage, acorns, carnations, pansies, daffodils, and peas in their pods. Though the drawing and coloration of the motifs are stylized rather that naturalistic, the species are as easily identifiable on this embroidered jacket as they are in botanical illustrations of the period.
While few complete garments survive from the seventeenth century, a relatively large number of jackets with embroidery similar to this example survive, and at least fifty portraits depicting women wearing versions of such a jacket are known. The jackets themselves appear to have been fashionable from about 1600 to 1625. The popular pattern of scrolling vines from which sprout a variety of flowers and fruits, and on which rest various birds and insects, attains its most exuberant expression in these garments. The vines in the present example are perhaps the most elaborate known. They are worked in a two-step wrapped ladder stitch which would have required approximately three times as much labor and metal thread as the more common plaited braid stitch. However, the result is quite effective, as the dense gold vines stand out from the linen foundation and support the colorful flowers finely worked in polychrome silk thread. 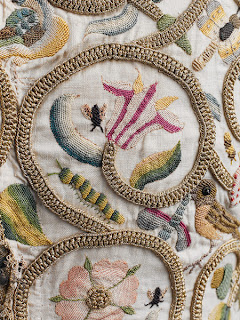 Source:Woman's jacket [English] (23.170.1) | Heilbrunn Timeline of Art History | The Metropolitan Museum of Art
Posted by Contemporary Makers at Saturday, May 14, 2011