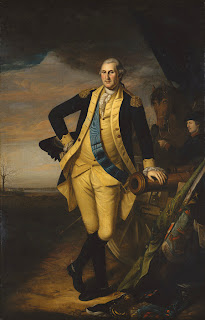 George Washington, 1780
Charles Willson Peale (American, 1741–1827)
On January 18, 1779, the Supreme Executive Council of Pennsylvania passed a resolution commissioning a portrait of George Washington for the Council Chamber and selected Charles Willson Peale as the artist. In preparation, Peale traveled to the Princeton and Trenton battlefields in February of 1779 to make sketches for the background. The original portrait, the full-length version now in the Pennsylvania Academy of Fine Arts, was a tremendous success and Peale completed numerous copies for royal palaces abroad, each time updating the general's military dress. This figure of George Washington was probably painted between June and August of 1780. In every other version, Washington is shown after the Battle of Princeton, but here he is depicted after the Battle of Trenton, the turning point of the war. It has been suggested that this portrait was commissioned upon the order of Mrs. Washington, because it is the only portrait in which Washington wears his state sword and because the painting descended in the Washington family. 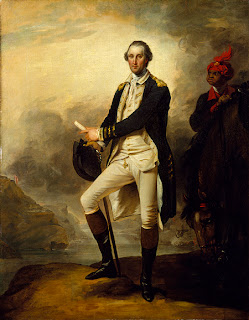 George Washington, 1780John Trumbull (American, 1756–1843)
In this portrait, Washington is standing near the Hudson River with his servant Billy Lee behind him. The view across the river shows West Point, where the red and white banner, possibly the navy ensign adopted in 1775, is flying atop the fortress. Trumbull had served on Washington's staff as second aide-de-camp at the outbreak of the Revolutionary War. He painted this portrait from memory about five years later, when he was studying in London. It became the first authoritative representation of Washington available in Europe and was soon copied throughout the Continent. 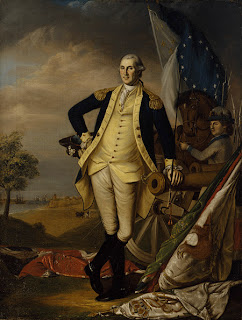 George Washington, ca. 1782
James Peale (American, 1749–1831)
James helped his elder brother Charles Willson Peale make replicas of his popular full-length portrait of Washington, commissioned in 1779 by the state of Pennsylvania. The bright color and clean outlines of this small version are characteristic of James's style. After the Continental forces, assisted by the French, had triumphed over the British at Yorktown in 1781, James Peale sketched the battle site, including here a view of the harbor showing the protruding masts of sunken ships. The French and the American flags fly above the general's head and the banners of the conquered lie at his feet. 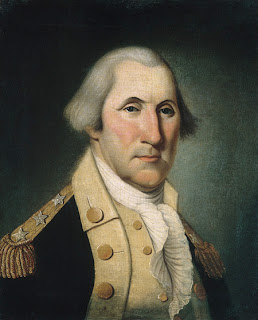 George Washington, ca. 1790
Charles Peale Polk (American, 1767–1822)
Polk used his uncle Charles Willson Peale's so-called Convention portrait as the basis for this image; Peale painted the original portrait from life at the Constitutional Convention in Philadelphia in 1787. Polk portrayed Washington numerous times from various sources but never from life. In 1790, Polk wrote to Washington requesting a sitting and stating that he had executed fifty portraits of him during the previous year. 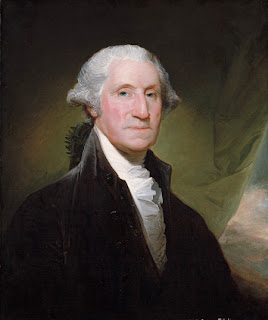 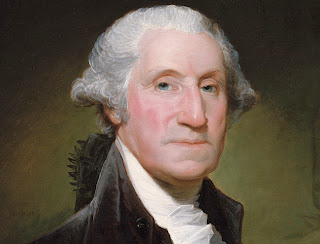 When he first sat for Stuart, President George Washington was sixty-three years old and near the end of his second term of office. Stuart subscribed to prevailing theories about physiognomy, which held that a study of the outward body could reveal a person's inner qualities. It took all of Stuart's colloquial powers to engage Washington in conversation so his face would move and Stuart could fathom the president's character, or personality. His portraits of Washington were a success from the start. Stuart painted three distinct portraits from life: the so-called Vaughan (as here, showing the right side of Washington's face); the Athenaeum (showing the left side of his face); and the Lansdowne (full length). Stuart painted at least 100 versions of the different compositions, most of them based on the Athenaeum portrait.
Source: The Metropolitan Museum of Art
Posted by Contemporary Makers at Monday, May 30, 2011