Robert Weil recalls his first meeting with John Davis. Robert states that he regrets losing track of John before he wrote Contemporary Makers, so that John could have been included in the book.
I met John Davis in 1964. At that time he was living in Santa Barbara Calif. This was the first Gunsmith I met that was making "authentic looking" Kentucky rifles. At that time, he was working for the Santa Barbara Museum of Natural history doing mostly taxidermy. Davis was/is an amazing artist.
He had great skill and interest in many directions. He scratch built a WW1 airplane, and actually flew it. At the time I met him he had built many Longrifles. He had formed a primitive black powder club of shooters and built most of their arms. They dressed in full historical garb for their events.
John had a vast knowledge of the various Long rifle schools. I had him make me a Lehigh style rifle. We picked it out of the Kindig book. That was the Bible then. It was a simple uncarved gun but remember it had wonderful lines. The cost was $400. Those were the days!!! 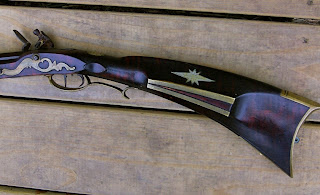