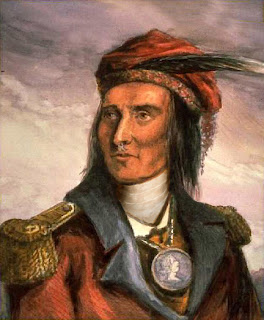 Dear readers, as promised, here is the first of the CLA live auction items. Some of you may have recognized the British Indian Department brand from the last CLA auction post. It is the brand applied to guns that the British gave to their Indian allies during the war of 1812. This years live auction includes a copy of the gun once owned by Tecumseh, and now owned by the Museum of the fur trade. If you have always wanted to see this gun, the actual original will be on display at at the auction right beside the copy of it, and if you have always wanted to own a working copy of this iconic piece, now is your chance. The story about the copy and how it came to be created for us was penned by Mark Sage, one of our team that went to Nebraska to photo and measure the original. He can tell it best. 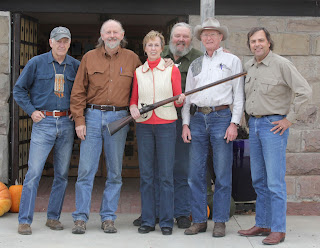 One of the many fine items being offered for auction at the Contemporary Longrifle’s annual meeting and show this coming August will be a contemporary copy of a Northwest Indian Trade Gun owned by one of the greatest Indian leaders in American History—Tecumseh. Charles Hanson purchased Tecumseh’s Northwest gun in 1954. It has a very solid provenance and now resides at the Museum of the Fur Trade in Chadron, Nebraska. Thanks to the museum’s director, Gale DeBuse Potter and Dr. James Hanson, the museum’s historian, CLA members Larry Spisak, David Wright, James (Doc) Carlson and myself were able to thoroughly inspect, partially disassemble and photograph Tecumseh’s gun last October in order to recreate this significant piece of history for the CLA’s 2012 auction. 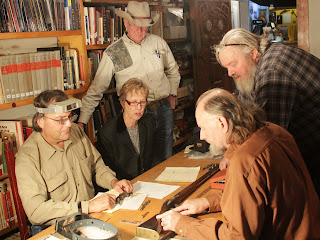 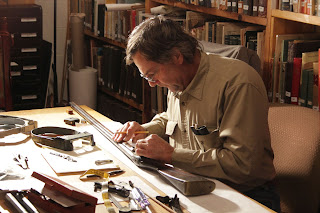 At the Museum of the Fur Trade, Larry Spisak examined and documented the measurements of the Northwest Gun once owned by Shawnee Chief Tecumseh .

What we discovered was a Northwest Indian Trade Gun, still in its original flint configuration, made by the English (Birmingham) gunmaker Whately, of a style and design similar to other Northwest guns produced in the early part of the nineteenth century for the fur trade. However, Tecumseh’s gun is unique and stands apart from other Northwest guns. Before and during the War of 1812, the British government provided firearms to their Indian allies in Lower Canada and throughout the Great Lakes. Each of these guns had specific marks, placed by the Board of Ordinance, on the lock, stock and barrel that earmarked them as gifts, as opposed to other firearms intended for strictly commercial purposes. Tecumseh’s gun, though it shows hard usage, is one of the few existing examples of these Board of Ordinance guns. 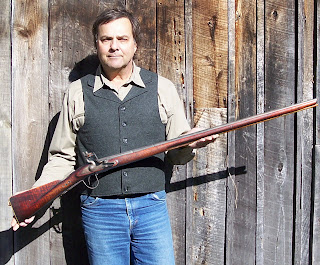 West Virginia gun maker Larry Spisak is building the contemporary copy of Tecumseh’s gun with help from other CLA members who have unselfishly donated time, materials and advice. Ed Rayl of Rayl Barrels provided an exact copy of the original barrel. Fred Miller provided the English walnut stock blank and David Keck of Knob Mountain Muzzleloading did the barrel inletting. Matt Denison of North Star West provided, the lock, all of the bolts, screws, pins nails, serpent sideplate and trigger guard. In addition, Matt assembled the lock and loaned Larry the barrel proof stamps for marking the barrel and the brand for marking the wrist of the gun. The finished gun has a carefully thought-out degree of applied patina on both the wood and metal parts to reflect how the gun might have looked when Tecumseh owned it. With the quality parts used and the attention to detail that Larry has given to building the gun, it is not only a documentary example of an important historical firearm but destined to be a good shooter as well. 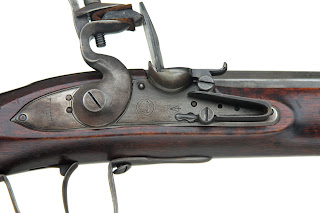 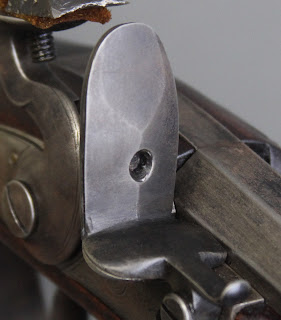 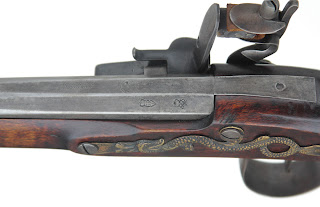 Retired now, Larry worked 32 years for the US Army Corps of Engineers as a Lock and Dam Operator on the headwaters of the Monongahela River in West Virginia and Pennsylvania. He built his first muzzleloading gun during the winter of 1975 and attended his first rendezvous on the West Fork of the Bitterroot River in Darby, Montana in 1976. Since then, he has built a dozen or so muzzleloaders, including two pistols, several long rifles, a couple of plains rifles, a First Model Long Land Pattern musket and an award winning Jaeger rifle that was featured on page 24 of American Tradition magazine (Volume 2, Number 2.)

Larry Spisak is also well recognized as a fiddle player and repairs musical instruments. He has been a member of two groups, Curmudgeon and Morgan’s Glade, whose focus has been on early American music. Both groups provided background music for the American Longhunter Video series. Morgan’s Glade has performed at a number of historical events throughout the east.

Larry sometimes brings his fiddle along on historic treks; listening to him play around the campfire is a real treat. Larry comments, “My interest in music and history led to a fascination in the history of the violin. I started out making simple repairs to my own instruments, leading up to building a violin in 1983, and a mandolin in 1993. Soon, others started bringing instruments of the violin family to me for repair and I started to maintain those instruments for several community orchestras.”


Larry has this to say about the Tecumseh gun project, “It has been the opportunity of a lifetime, getting to examine a historic relic of this significance and meeting and working with several outstanding artisans”. Concerning Tecumseh’s Northwest gun he relates, “I find myself in a state of awe, wondering where it’s been and who has handled it and what surroundings it has found itself during its existence. One thing concerning this gun that haunts me is wondering how many souls may have been sent to their maker by its owner.”