In 1811 the Shawnee chief Tecumseh conducted a mission to the Creek Nation in Alabama. He urged the Creeks to throw off the white culture that many had adopted and return to the ancient traditions of their people. Many Creeks heeded Tecumseh’s call, while others resisted. A civil war broke out among the Creek Nation in 1812, almost the same time the war between the United States and Great Britain began. The traditionalist faction, known as the Red Sticks, occasionally carried their war to the white settlers living on the frontiers, including forays into Tennessee. In August 1813, Red Sticks attacked and captured Fort Mims in Southern Alabama, slaughtering 250 men, women, and children. This massacre galvanized the Southern States, and Tennessee sent an expedition of Tennessee Militia under the command of Major General Andrew Jackson to destroy the Red Stick menace.
In early October, the Tennessee troops rendezvoused at Fayetteville, Tennessee and encamped on a plain in the bend of the Elk River. The camp was named Camp Blount after the governor who called the troops into service. On the 7th of October Jackson arrived at Camp Blount, his arm in a sling recovering from a wound received in a fight in Nashville several weeks before.
Crossroads to Destiny painting by David Wright
Tennessee mounted troops under the command of General John Coffey moved south into Alabama. A scouting patrol that included private David Crockett of the 2nd Regiment Volunteer Mounted Riflemen indicated that a large number of Creek warriors were headed toward Coffey’s position. Crockett’s report caused Jackson to move the balance of the Tennessee army from Fayetteville to Huntsville, Alabama, from which point he moved south into the Creek Nation to carry the war to the Red Sticks. A series of battles were fought culminating in the Battle of Horseshoe Bend in March, 1814.
Horseshoe Bend saw slaughter on a grand scale. Nearly 900 Creek warriors died and casualties among the Tennesseans numbered 47 dead and 159 wounded. One of the wounded tended was 21 year old Ensign Sam Houston of the 39th U.S. Infantry Regiment. Houston’s wounds, an arrow to the thigh and two musket balls in the shoulder, were very serious and believed to be fatal. General Jackson recommended Houston for promotion in rank because of his heroism at Horseshoe Bend. Congress denied it. 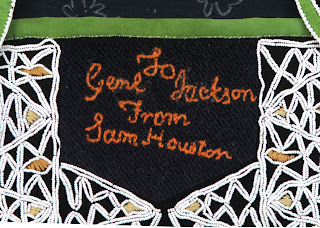 The embroidery inside the bag
General Jackson went on to defeat the British at New Orleans, and in 1828 was elected the 7th President of the United States. Ensign Sam Houston recovered from his wounds, was elected the 7th Governor of Tennessee in 1827, and in 1836 became the President of the Republic of Texas. Crockett was later elected to the State Legislature and to the U. S. Congress. He would cross paths again with both Jackson, becoming the bane of Jackson’s presidency, and later helping make Houston’s presidency possible and securing Texan independence by giving his life at the Alamo. 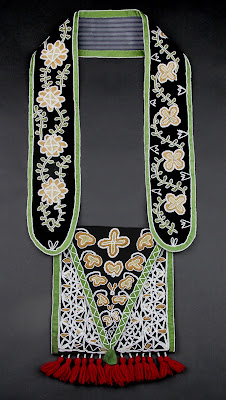 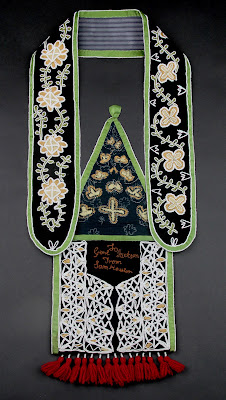 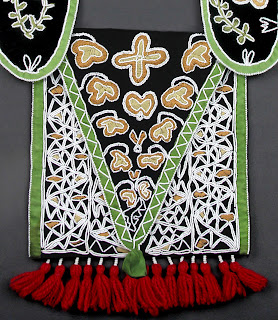 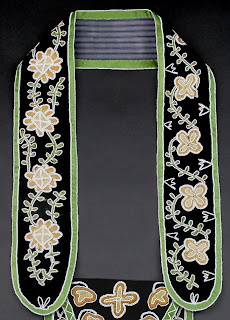 Details of the strap
Michael Agee
Murfreesboro, TN
I decided to make reproduce the Cherokee bag given to Andrew Jackson by Sam Houston because of my interest in Tennessee history. I am a proud Tennessean and this item is an intersection of three influential, powerful, even controversial names in Southern frontier history. The Cherokee( most powerful tribe in the Southeast), Andrew Jackson (Tennessee frontiersman, soldier, and future US President) Sam Houston( Tennessee frontiersman, soldier, adopted Cherokee, and future President of the Republic of Texas). Jackson, Houston and the Cherokee were brought together during the Creek Indian war which was a bloody phase of the larger War of 1812. Jackson and Houston went on to achieve greatness after defeating the British and Red Stick Creeks while the Cherokee who helped them, later lost almost everything. Sam Houston lived with the Cherokees while growing up, and returned to live with them from time to time. There is an existing painting of Houston as a young man in Cherokee dress.
I wanted to copy this bag because it demonstrates the beauty of Cherokee style, it bears the names of two of the most important Tennessee soldiers from the War of 1812, and it highlights the irony and tragedy of the Anglo- Indian relations in the Southeast.
I've been doing leatherwork, woodwork and making clothing since I was a kid but I decided to try my hand at this intricate embroidered and beaded bag. This is not my specialty but I really wanted to copy this piece that contained so much rich Tennessee history. The original can be found at the Smithsonian Institutes's Museum of the American Indian. The bag is made of black wool, decorated with wool and silk embroidery thread along with thousands of # 14 glass seed beads. The edge beading is made up of slightly larger # 11 beads. I have done a lot of 18th century bead work using # 8 pound beads so this was a challenge working with beads almost half the size of those I am used to. All beads are white on this item. I started to regret taking on this project several times in the process but I'm glad I stuck with it. It took twice as long as I had expected and I actually had to start over at one point. I have put at least 100 hours into this project and was honored to have it included in the Tennessee State Museum War of 1812 Bicentennial exhibit where it will be on exhibit through June.
I was glad to reproduce this representative Tennessee item for the CLA “War of 1812 Fund Raising Project”. The CLA is a great organization and I have been going to the Lake Cumberland Hammer-In and Lexington Show since I was right out of High School. David Wright introduced me to the CLA when I was still a teenager. I've long considered him a mentor and friend and value his opinion and advice on everything I make. Without the CLA as a community and a group of artists and collectors who share and encourage creativity I might not even be making anything at all. Now I'm teaching High school and take my wife and son to the CLA show. This means I have been going to CLA shows for more than 1/3 of my life! That makes the CLA pretty important to me. CLA artists and collectors have been so supportive and encouraging to me over the years and I'm blessed to be part of such a great family of artists and call so many of them my friends. 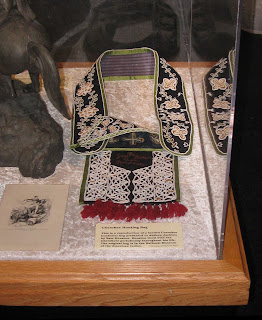 The Agee bag at the Tennessee State Museum exhibit 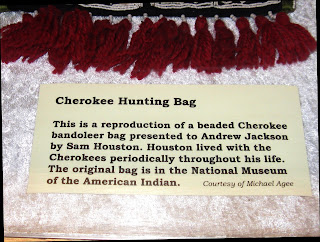 The description card from the museum exhibit
Mike and his son Caleb at the museum
Note: This outstanding bag is currently included in the Tennessee State Museum's special War of 1812 exhibit.
Copy by H. David Wright with letter by Mike Agee. Photography by H. David Wright.
Posted by Contemporary Makers at Tuesday, March 20, 2012