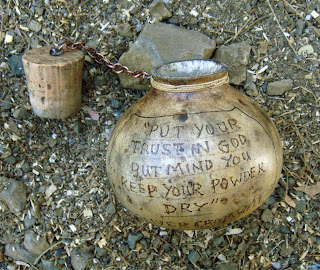 Keeping your powder dry is essential especially if your life or lively hood depends upon it. In America’s southern mountains, the “Lands of Powder Gourds and Face Jugs”, not only did the Scotch-Irish preserve the Kings “Old English”, but they preserved the old stories and legends as well. That’s where the inspiration for this decorated powder gourd came from.

In their “Granny Tales”, these frontiersman and mountaineers would have been raised on the story of “Oliver Cromwell and Keep Your Powder Dry”, not only because it’s a good idea, but because it puts the rest of the saying, “Trust in God men”, in perspective too.

The legend goes that Cromwell was marching his army across the country in his successful campaign to destroy the power of the “Royalist” monarchy when they came upon a river. As they commenced crossing, Cromwell was heard to say” Put your trust in God men, but mind you keep your powder dry!” I don’t know if they trusted God, but they did keep their powder dry and eventually unseated and executed the king and installed Cromwell, not God, as the “Lord Protector of England, Scotland and Ireland” in 1653. 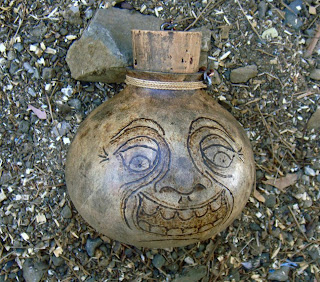 I can imagine the words from that river crossing were told and retold a bit tongue in cheek, especially since at the end of the story, Cromwell dies, the Royalists again assume power, and the King orders that Cromwell’s dead body be exhumed, hung in chains and beheaded! 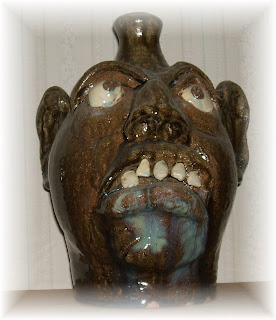 Here in the southern mountains, gun powder was often stored and kept dry in a simple, plain gourd, but this one has been decorated in a poor mans attempt to copy a traditional face jug, yet another southern tradition. It was the same Scots/Irish that brought the art of distilling “uisgebetha” or what we came to call whiskey. Traditionally it is said that grotesque face jugs were originally made to hold the liquor and scare the timid and children away from drinking it.

This folk art powder gourd, named “Powder Face”, tries to combine these traditions as it recalls both the need to “keep yer’ powder dry” and recalls the likely origins of the saying.

Copy and photos by T.C. Albert.
Posted by Contemporary Makers at Sunday, August 02, 2009