Head by Steven Lalioff with Headress and Silver by Jan Zender 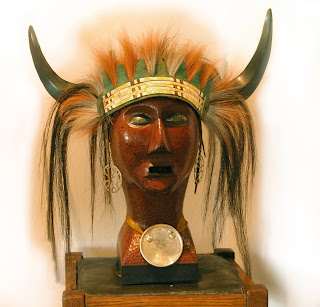 The head I carved from a solid block of black walnut that grew long ago in Central Indiana. The wood came from a log barn I helped relocate. The walnut was felled around 1830. There were over 200 annular growth rings, ergo this tree started growing around the time of Jamestown's settlement.

I based the effigy upon an early 17th c. ball club that is thought to be of Seneca origin. Like the original club, my effigy has inlaid lead eyes. I chip carved the surface and then painted it with a paint I mixed from an old recipe. The surface I then patinated, wearing though the high points of the chip carving and paint to reveal the very black walnut beneath the paint. I began carving this sculpture almost 10 years ago....and finished it the day before the CLA show in Lexington! (I don't like to rush things)

Jan Zender created the incredibly wonderful headdress based upon originals collected in the Eastern Great Lakes region during the late 17th to the mid 18th century. I commissioned Jan to make this buffalo headdress for me after my return from Paris in 2006 where I saw 2 veryrare originals on display at the Musee Du Quai Branly. Jan had never before made a crown like this but his 30+ years of reproducing and restoring Native American objects had taught him every skill required. Jan, also created the sterling silver ornaments upon the effigy. The round gorget is of the early 18th c. style traded to the Indians. Jan engraved it in a floral design based upon early examples. The earrings are his copies of the ones worn by the powerful Miami chief Little Turtle. I much admire Jan's work as he has a keen eye for detail and makes every effort to do his work in an, "old hand". His engraving is light and free-flowing as is most typical of originals. He dosn't gild the lily, it's just like old!

Jan braided both deer and horse hair for this crown and used only natural dyes and pigments. At first, I wanted to micro manage how this all went together, but it dawned upon me; I don't like working under such direction as it stifles creativity...so I gave him free reign and asked only that the colors be somewhat muted. I am so glad I got off his back, it is ever so much more beautiful than what was in my minds eye.

This was a collaboration that was 3 years in the making....make that 30 years in the making as that is how long Jan and I have been working and have been friends. The only regret Jan and I have is that is was sold before we had time to photograph it in a studio. Cudos and many thanks to Jan Riser, she saved us at the CLA show by taking special pains to take this photograph....and it isn't easy to photograph such shiny things!

Jan Zender and I have already started working on another effigy and headdress...the next will be the same but completely different!

Copy by Steven Lalioff and photo by Jan Riser.
Posted by Contemporary Makers at Sunday, August 23, 2009