This is a 1775-1785 Augusta/Rockbridge County, Virginia rifle based on the two rifles documented by Wallace Gusler in the Journal of Historical Arms Making Technology, Volume II (JHAT II). The patchbox and its engraving is an original design extrapolated from the boxes on the guns documented in JHAT II as well as those by John Davidson. The lock is a Chambers Early Ketland, filed, polished and engraved in a manner typical of most imported English locks with heat blued screws.. The 50 caliber, 44" long, Bivens profile Getz barrel is polished amory bright. A White Lightning liner is installed. The rifle has modified Davis double set triggers that have been heat blued. The butt piece and guard are neatly filed from yellow brass castings from Reeves Goehring. The rest of the mounts, including the one piece nose piece, are hand made from sheet brass. The stock is carved from a blank of very curly, stump cut, quartersawn, hard maple from Freddie Harrison. The barrel is hand inlet using gouges, period gunstock planes, and rasps. The stock is entirely scraped and burnished and the rifle is generally finished in a workman like manner. The forearm moulding and buttstock moulding were cut with a custom made scratch stock in the original manner and show the characteristic ripple from scraping very curly wood. Period correct tools and techniques were used with files, rasps, chisels, and planes being used for most of the work.. The stock is stained with aqua fortis and finished in oil. I have fitted the scraped hickory ramrod with a plain sheet steel ferrule on the breech end that accepts a hand turned wiper made for the rifle. The wiper is in the patchbox. 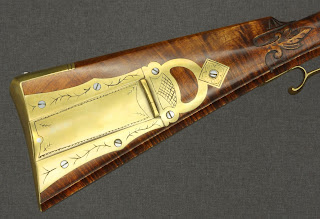 This rifle was awarded a Judges choice ribbon in the Master class at the 2009 Dixons Gun Makers Fair. 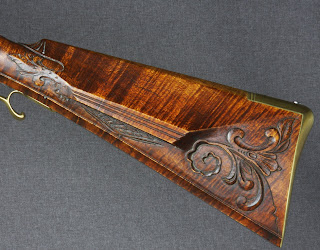