“The Percumsagun” by T.C. Albert 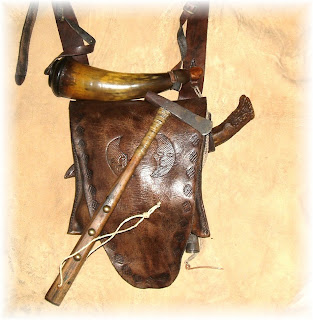 The western frontiers of the Illinois territory were initially settled by homesteaders and hunters from Kentucky and Tennessee. They built their cabins and shacks in the timbers along the rivers and big creeks that criss-crossed the prairies thinking that if the tall grasslands all around them were unfit to grow trees, then they were unfit to grow crops as well.

This pouch set was inspired by the early settlers that built along the “Percumsagun”, a creek that was given its name from the local Indians meaning “The Little Ax”, a name it bears to this day. Initially the area was peacefully settled in the early 1800s, but was very close to the “Indian Boundary Line” located just a few miles to the north. The hunters and settlers were not supposed to cross this line, but of course they soon did, leading to much friction with their Indian neighbors, especially among the Sac-Fox nation, eventually erupting into the Black Hawk war.

It was not only a transitional time for the Indians and settlers, but also for their longrifles and hunting pouches as well, as their flintlock muskets and rifles were slowly converted to or replaced by the new percussion cap. This bag reflects that transition with its simple utilitarian powder horn and large antler crown handled hunting knife, a hold over from the days of the early subsistence hunters and their famous Illinois “tearer-guns”. The improvised steel thimble measure and home made bullet pouch or “sugin reflect its owners usually humble situation, while the “man in the moon” and diamond cross hatched stampings , popular motifs in the south, reflect its cultural roots and heritage. The presence of both a copper vent pick and a cap box represent the transition to the new days soon to come, while the addition of the “little ax” asks that we remember the old days and all the history that was witnessed along “The Percumsagun”. 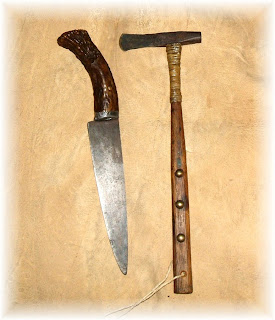 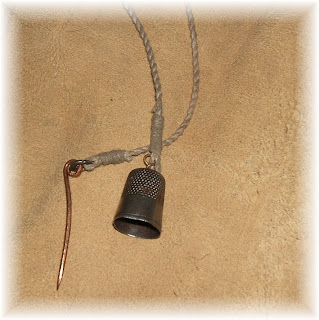 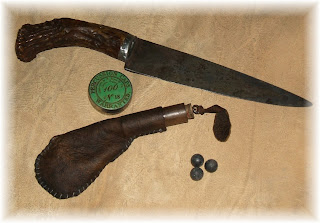 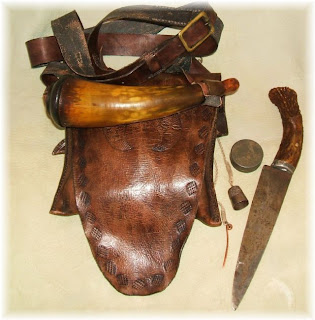 This pouch and its accoutrements were all made by T.C.Albert
Posted by Contemporary Makers at Saturday, August 15, 2009