SN NSN. Cal. 50. This wonderful, old Plains rifle sat in some unknown museum with a heavily weathered tag which reads “THIS RIFLE WAS SURRENDERED BY THE SITTING BULL INDIANS AFTER THE CUSTER MASSACRE. THE STOCK HAS BEEN REPAIRED WITH…SIOUX INDIAN”. Portion of tag describing repair is missing, however it is obviously done with old screws, nails and rawhide, no doubt orig and contemporary to era. Once tacked around periphery, now only shafts and holes remain. Very similar Plains rifles are found pictured in Custer Battle Guns by John S. Dumont. Regardless, this is a no doubt a Plains Indian used rifle.
CONDITION: Sound and solid as a relic. Iron pitted overall, uncleaned. Bbl is maker marked forward of sight, but is indiscernible due to rust. Stock has erosion on top comb. Bottom of buttplate broken a long time, well patinaed wood and brass. Stock has numerous small scuffs and blemishes, but overall a wonderful “as found” relic with orig pasted tag easily discerned.
50327-1 JS (4,000-6,000)

These two early to mid-20th century have good patinas and the shorter has a partial makers mark in blade that is not discernible. This pattern is highly reproduced, but this pair appear orig. Shorter knife attached with iron pins, and the longer with brass. Blades are quite hefty with the shorter knife being .31″ thick at ricasso, 2-1/8″ wide and about 8″ long. The longer knife is 9-3/4″ long, .28″ thick at ricasso and 1-5/8″ wide. Longer of two knives has file branding and punch dot edge design. Smaller knife has file branding and flat copper wire added to grip.
CONDITION: Good to very good overall. Both knives are sound and solid with lead reinforcement between blade and wood. Both knives show considerable filing and resharpening, staining and pitting, fairly heavy on longer knife which exhibits tag “Rare dag knife with hand forged blade from the South Dakota area 1820’s-1840’s”, partial makers mark in cartouche starts “JUN…”. Brass wire has mixed copper/brass patina and is loose from apparent shrinkage of wood.
51008-1 JS (6,000-8,000) 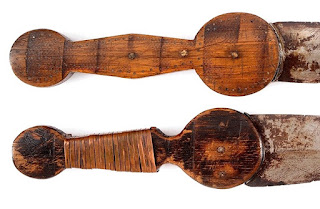