Walter O'Connor, Jr. passed away January 25, 2018.  This auction is his collection which contains numerous early powder horns, books, locks, rifles as well as rifles used in movies and tv shows.

Description: This unique two-piece brass patchbox was found at a Lancaster County, Pennsylvania auction by Walter O'Connor. When discovered, it was on a restocked rifle composed of random parts, none of which accompanied it on the original rifle. John Moll Jr. was a Lehigh County gunsmith who was born in 1773 and lived until 1867. He worked in Allentown, Pennsylvania and frequently incorporated "Liberty heads" or "Allentown Indian heads" on his rifles, usually in front of the forward tang of the triggerguard. This engraved patchbox lid, however, shows the full standing figure of an Indian or Son of Liberty holding a flintlock longrifle with a Lehigh County sideplate and patchbox in his right hand and swinging a tomahawk in the other. The figure is standing over the familiar "D"-shaped design around the iron rivet attached to the latch. The finial has had the two lower ears removed, probably when it was restocked, and only traces of the engraving that bordered them remains. The upper ears have been slightly rounded as well. No doubt both of these modifications were done to make in-letting easier. The finial's top screw hole is surrounded by an engraved flower above a checkered triangle which is typical of John Moll Jr.'s other known patchboxes. The cast patchbox retains a mellow unpolished patina and the engraving shows little wear and retains its original length of 6-5/16" and the width of the lid has been reduced to 1-3/16", probably 7/16" less than its original width. This patchbox was featured as the cover article in the Kentucky Rifle Association Bulletin in the Spring of 2011, volume 37, no. 3. The article was written by Walter O'Connor and titled "A Chance Visit". A copy of the article, including Walter's hand-written notes and research on this piece, are included. This is an important piece as it relates to the mystery of the Allentown Indian or Liberty figure.


Description: The head measures 7-1/2" overall with a 2-1/2" blade. The haft measures 14-3/16". Hand forged construction with 3-1/2" diamond-section faceted spike and engraved borders around relief bands on both sides of eye. Narrow eye, haft probably ash and appears to be period. For similar examples, see plates 68 and 76 of Harold L. Peterson's "American Indian Tomahawks". This tomahawk is unusually well made and has excellent architecture and detail. Very good condition. The head has a dark freckled patina with some period nicks to the edge and point of spike slightly flattened. Haft is excellent, exhibiting a great deal of wear.
Est: $1,500 - $2,500


"EBENEZER KNAP" "Fort William Henry Nov,r 5,th 1756" All of the lettering on this horn is contained in three panels that follow the contour of the horn. The lettering is flamboyant and well executed. There are floral sprays and vines in panels around the lettering that are very fluid and expressive. There is also a decorative, organic type border at the end of the raised portion of the horn towards the spout.
This horn is fitted with a nicely patinated and unusual, flat, brass butt cap, which is attached with iron brads. There is also a large 1 - 1/4 inch decorated, brass staple for a carrying strap located just below the butt cap on the horn. This horn displays a 5 - 1/2 inch recessed, dark portion leading to the spout. This portion has two carved rings for the carrying strap. This horn measures 12 - 1/2 inches overall. There is an Ebenezer Knapp listed among the privates of the 5th Company, 4th Regiment of Connecticut soldiers under General Phineas Lyman on a 1756 dated muster roll. These men were mostly pressed into service at this early point in the war. They served in Canada during the 1756 campaign. Men under General Lyman were also present at Fort William Henry, Fort Crown Point and Fort Ticinderoga and saw action several times.
An African American clerk in the company of Captain David Baldwin, John Bush carved several known horns. Bill Guthman states he also carved at least seven horns before he was captured by the French and Indians in 1757, never to be heard from again. His distinct style was copied by other highly skilled horn engravers and he might be regarded as one of the founders of the Lake George School of horn engravers.

Condition: Excellent, as described. This is an exceptionally attractive horn with a wonderful honey toned patina. There is a 1 - 1/4 inch hairline crack on the spout. Some small pieces are missing from the rings, along with minor abrasions. There is a vacant nail hole on the butt cap. 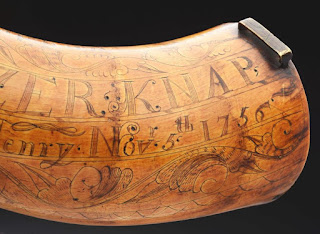 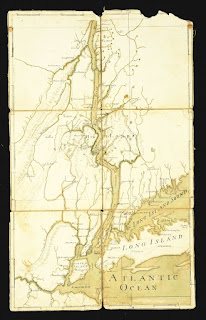 Lot 48: Francis Pfister's Folding Map From of the Hudon River Corridor, Complete with Map Case, Circa 1758.

Description: PFISTER, Francis (1740-1777). Untitled manuscript map [A Survey of the Hudson River, Lakes George and Champlain commencing at New York City and from thence to St. Johns] on 3 sheets, ink and graphite with watercolor wash. Not dated, but approximately 1758 with possible later additions. Approximate scale 1:633,600 (10 miles to 1 inch). 3 sheets of laid paper, each sheet approximately 15 x 9 1/4 inches and cut into six sections for ease of folding, then mounted to linen backing; with its original pressboard traveling case, approximately 4 3/4 x 5 3/4 x 1 inch, covered in buff silk and bearing decorative edging and inscription in black ink, 'MAP FROM NEW-YORK to St. JOHN'S.' WITH one drafting divider/compass of brass, 2.5 inches H--all that remains today of Pfister's captured drafting set. Condition:Dimensions:18" x 14". 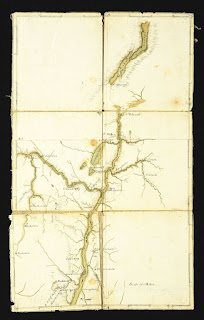 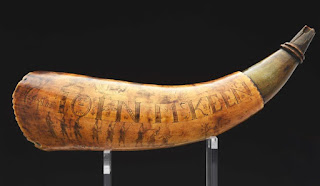 Description: This folk art horn is inscribed: " CAptn IOHN McKEEN"
"Jacob gay hand"
"July 6 1759"
"TEK CAR OF Your HED" (According to Walter, the engraver advises this horn's owner to 'watch his scalp')
"Couonoto 1777 (?)" (This inscription is in a different and later hand)
The British Coat of Arms is whimsically engraved with Jacob Gay's distinctive and expressive lion. In a panel under the seal, Gay has carved the owner's name with several wonderful faces and designs, illuminating the letters. A panel under the name plate shows a rare depiction of a detailed file of nine soldiers wearing mitre caps. Six of the soldiers are marching or preparing to present arms. The lead group of three soldiers appear to be in the typical British formation and are pictured shooting at a well dressed Indian, who is returning fire from behind a tree. Some other images included on this horn are a large, whimsical four legged animal which appears to be pawing at an unknown bird roosted at the top of a tree, and a stag. A partial border of organic shapes and foliage is present at both ends of the raised part of the horn. There is also a crudely drawn soldier or Indian holding a sword by an unknown hand. Another well detailed image of a mitre capped soldier, who is depicted smoking what appears to be clay pipe and brandishing a longarm is present, and possibly of a different hand.
This horn is fitted with a flat, pine butt cap. It is missing its finial and is surrounded by a sawtooth horn border, which protrudes above the cap. The cap is secured by two iron pins. There is a crudely scalloped border at the beginning of the darker, recessed portion of the horn. Below the spout are two rings for a carrying strap. This horn measures 11 inches overall.
The horn is signed by its carver, the skilled Jacob Gay.

Condition: Very Good, as described. This horn displays a beautiful, mellow, honey toned patina. All of the images are intact and discernable, although in some cases a bit worn, as would be expected. The finial, which would have been attached to the plug, is no longer present. There are several areas of damage to the sawtooth border at the butt cap end of the horn. A one inch hairline crack also exists at this location. There is a half inch area of chipping on one of the rings below the spout, as well as other minor abrasions. Half of the spout tip is missing for approximately one inch from the tip. This edges of this breakage have become smooth. 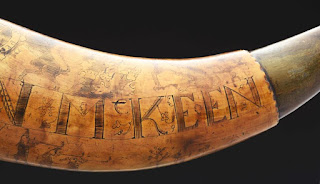 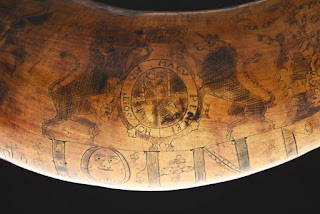 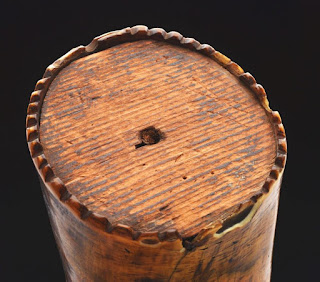 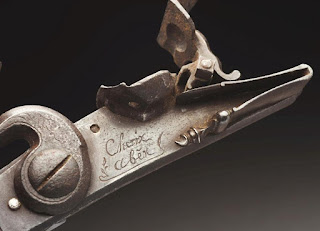