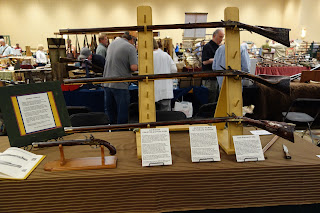 Displayed here are three recent acquisitions to our collection of Brennan Family flintlocks and accoutrements.  Each gun has unique features making them valuable additions to the collection.

For a first gun, the Jesse Brennan #1 flintlock is stunning in its execution and craftsmanship. As they say, “The apple does not fall far from the tree.”  It also heralded the excellent work that would follow.

Inspired by Shumway’s #16 gun, Jud’s #83 flintlock is unique for its use of curly ash for the stock.  The accompanying knife and tomahawk, handed in the same wood, add to the interest.

Jud’s Virginia school #115A flintlock and matching #115B pistol represents a master craftsman at the height of his power.  With its exquisite carving and inlay work, this set may represent some of Jud’s finest work.

Please enjoy these treasures of the Brennan Family displayed together for the first time.

From the Collection of John and Vicki Hast 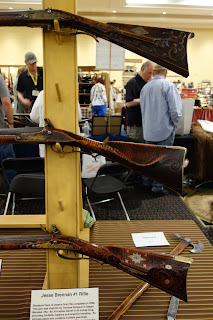 This gun might have been produced by Thomas Simpson for a wealthy Tennessee landowner in the late 18th century. 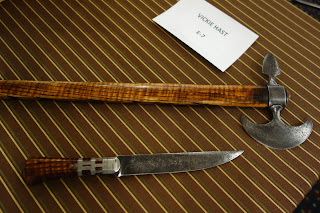 Jud’s #83 rifle was inspired by gun #16 in Volume I of Shumway’s “Rifles of Colonial America.”  Like the #16 gun, the rifle is dominated by the unusual architecture and appearance of the stock.  Unlike the selected cherry used in the original gun, this gun is stocked with curly ash containing an extremely tight curl.  Jud faithfully reproduces the unusual cheek piece and carving of the stock.  As opposed to the wooden patch box on the original gun, Jud provides us with a plain metal patch box suggesting a Christian Springs style gun.  A 44-inch, .54-caliber heavy barrel and a large English lock complete the gun’s mid-1700s appearance.

This set of items could have been employed for fighting the French and their Native American allies on the mid-18th century frontier. 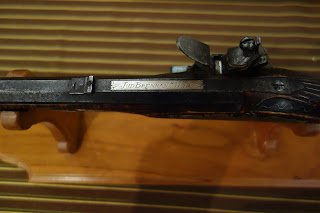 Jud completed this rifle and matching pistol for Bob Roughton in 2011.  They were acquired at the CLA Show in 2017 from Jim Chambers, acting as Mr. Roughton’s agent.  Unfortunately, Mr. Roughton, a discerning collector of fine guns from many noted makers, passed away later that year.  This gun certainly measures up to his exacting standards.

Inspired by the Winchester, Virginia School, it has elements of guns from both Simon Lauck and John Sheets.  The rifle’s 44-inch, .45-caliber produces near perfect balance and superb handling.  The exquisitely engraved patch box contains multiple piercing and a single brass inlay.  Multiple finely engraved floral silver inlays adorn the stock.  The masterfully carved stock is accented by silver wire inlays.  A handmade lock further adds to the gun’s value.

The matching .45-caliber pistol features similar stock carving, and side plate and trigger guard engraving as the rifle.  Once again, silver wire inlay is used to tastefully accent the carving on the stock.

This matched set of weapons might have been produced for a wealthy gentleman of Virginia in the late 1700s. 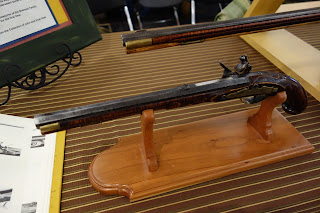 Photographed at the 2018 CLA Show by Jan Riser.