This gun is built around an Ed Rayl 12 bore octagon to round barrel 6 feet long. The lock is a Chambers Late Ketland. It is stocked in worm tracked maple that started it's life as a rough cut of the "Feather" gun butt profile. It's a scraped finish with aqua fortis and linseed varnish.  The trigger,  plate, thimbles, and patch box cover are all handmade by me.  Jim Webb made the front thimble.  The patch pox cover is based off of 4 different original guns.  Many thanks to Frank Kobilis for helping locate some of the  examples. The trigger guard is off a Bess that has been cut way down in the rear, inletted and pinned in the front and surface mounted with screws on the rear extension. The butt plate is of thick vegetable tanned leather that has been wet formed and nailed on with square cobblers nails. The front sight is coin silver.

The owner desired a mountain cobbled smoothbore with a six foot barrel. It was inspired by a reference to a shotgun with a six foot barrel being used for deer hunting in the 19th century by Charles Coale of Abingdon VA (1807-1879). Mr Coale wrote the Life and Adventures of Wilburn Waters, the famed 19th century hunter of Southwest Virginia and was editor of the Abingdon Virginian.  Coale was a member of the House of Delegates and my version/interpretation of the gun was made for my delegate. These super long guns were originally used as waterfowling pieces for use on the coasts and rivers and a few possibly found their way in the region for shooting passenger pigeons. 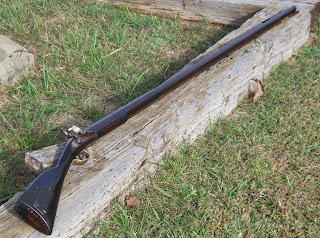 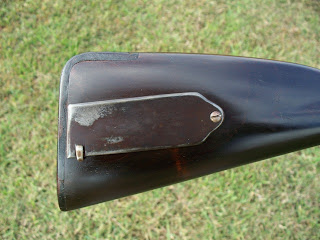 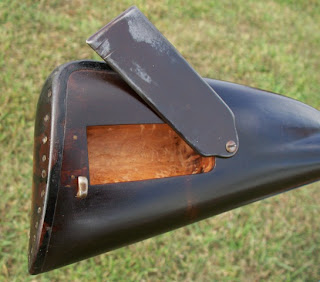 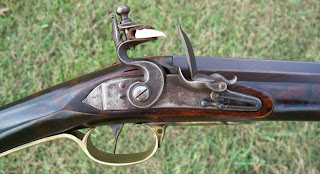