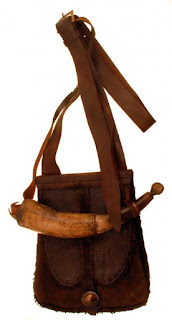 While a healthy respect for the past is second nature for most blackpowder enthusiasts, passing on that heritage to the next generation is equally important. In a remarkably well executed collaborative effort, CLA artists Ron Vail and Ken Scott have teamed up to produce a distinctive horn and pouch set that captures the poignant significance of inherited tradition.

Scott explains how the unique project came about. Last year he was approached by Ron Vail about crafting a matched horn and pouch set that "tells a story". "I've always been drawn to things that have a history," says Scott, "so I jumped all over this project." The horn tells the fictional, but entirely plausible, tale of an 18th century father who "had a powder horn he really liked," says Vail, "so he made a smaller version of his horn and gave it to his child." Vail's diminutive horn, which is engraved with a series of circles and moons, is expertly aged to reflect an original example. Vail's artistic goal, he explains, is to craft a horn "that looks like it was made and used" on the early American frontier.

The horn is well paired with Scott's unique hunting pouch. It's a finely aged and richly textured bag, that, explains Scott, reflects the trapping skills and dedication of a young outdoorsman. "The beavertail flap is on the small side and could very well have been trapped by a young boy learning trapping." It's also crafted to visually express the help that the boy would have received from his father. The subtly fringed bag, observes the artist, "was made with rough out leather to give it a more homespun look", and the button on the flap closure "was taken from his mom's or grandmother's sewing basket."

This truly one-of-a-kind horn and bag set deftly simulates museum quality originals, and will afford auction attendees a unique opportunity to own two fine pieces and simultaneously support the CLA. "The association has been significant," says Scott, in bringing members' work "into the art realm…the CLA deserves support from every artist and craftsman in the muzzleloading community." For Vail, the entire project "is my opportunity, in a small way, to help out this organization." 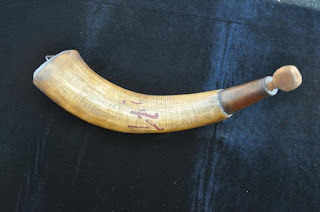 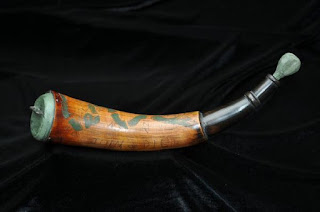 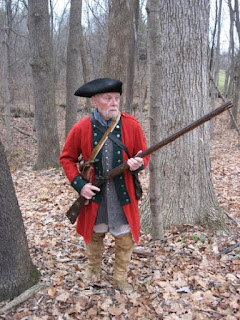 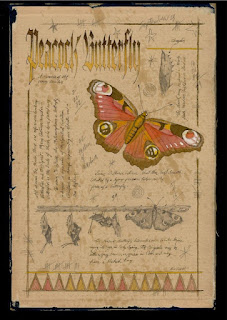 Ken Scott's work can be seen on his website at http://www.americanfrontierart.blogspot.com, or he can be contacted by email at kenscottart@att.net.

Copy by Joshua Shepherd with photos supplied by the CLF.
Posted by Contemporary Makers at Wednesday, August 03, 2016