When the war of 1812 finally broke out, General Isaac Brock had been preparing for it for quite some time. After stopping the American advance under the command of William Hull, Brock met the Shawnee Chief Tecumseh and together they planned an attack that resulted in the fall of Detroit and the capture of its entire garrison.


Brock and Tecumseh became instant friends, and after the Battle of Detroit they exchanged gifts and tokens of that friendship. Brock presented Tecumseh with an engraved brass compass and a fancy gold laced officer’s coat. Tecumseh presented Brock a carved war club and sash.


Brock was wearing the sash when he died several short months later at the Battle of Queenston Heights, the war club was sent to his family in Guernsey, where it has remained in their possession for nearly two centuries. Valued at nearly 500 thousand dollars, this war club is one of only four Shawnee war clubs known to exist, making it both a priceless cultural artifact and a treasure from the war of 1812.


CLA artist Mike McHugh of Clarksville Ohio has carved a detailed replica of the Tecumseh/Brock war club for the upcoming Contemporary Longrifle Association’s “War of 1812” fundraising auction. Mike’s work is museum quality, and the chance to see, handle, and potentially own this contemporary treasure for yourself shouldn’t be missed. 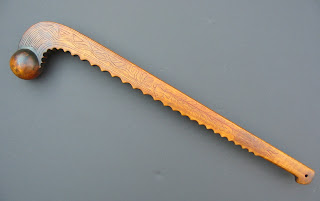 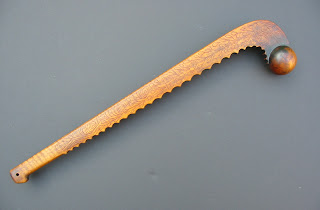 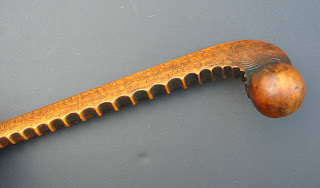 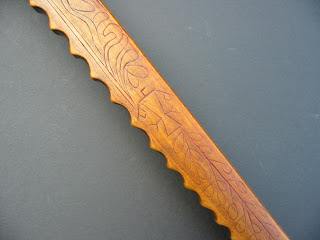 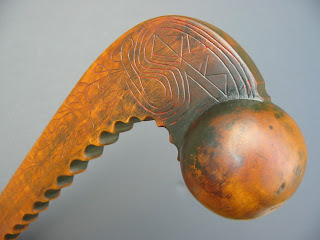 For more information about the auction or CLA membership please visit: Longrifle.
Photos by Mike McHugh with copy by TC Albert.
Posted by Contemporary Makers at Friday, June 22, 2012