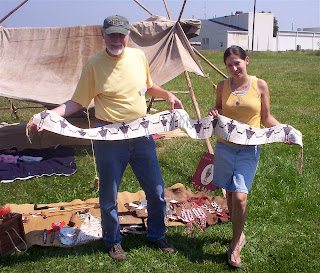 This Wampum Belt was made by Marya Blake uses the same construction technique that can be found on the original double strand twining tech unlike the more commonly used loom work, this means these beads were put on one at a time.

This belt has over 10,000 beads, it is known sometimes as the George Washington covenant belt or the Treaty of Canandaigu belt. This belt was made for historical artist Robert Griffing for a upcoming painting of the Treaty of Canandaigu Griffing has been working on now for 2 years. He says this painting is his largest to date. The Treaty of Canadaigu was signed Nov 11, 1794 between the grand council of the Haudenosaunee and the United States of America being represented by Timothy Pickering. It was the second diplomatic agreement America entered into under its new Constitution.
Copy and photos sent by James Blake.
Posted by Contemporary Makers at Tuesday, June 22, 2010