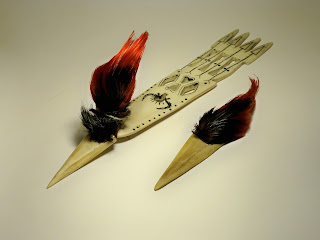 Native Americans seemed to view the bills as a Totem of successful Warfare. Ivory billed Woodpeckers are thought to be extinct, but as of the last few yrs there is some new and compelling evidence that some might be surviving in the Swampy Forest of the Cache River National Wildlife refuge in Arkansas. Since having a original of one of these is Rare I had to make the imitation Bird Scalp, I used a pheasant scalp and cut and shaped the scalp then dyed and painted it to simulate a Ivory billed scalp then attached it to the Imitation bone beak using Hide glue. 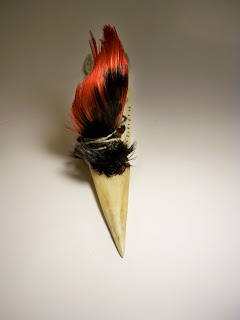