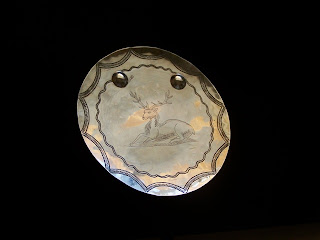 The original that this gorget is based on, was found at Kuskuskies Town, Lawrence County, PA along the Mahoning River. The archaeological site is also known as the Chambers site, and the dates of occupation run approximately 1703? - 1776. The original gorget measures 4 inches in diameter and has a cartouche mark stamped NEW YORK next to the left button hole, with a personal makers mark touchmark AJS just below and to the right of the engraved stag. The makers have been identified as New York Silversmiths (Father- son team) A&J Scrymgeour, who worked from1803?-1814. In addition they worked for John Jacob Astor's American Fur trade company. This piece definitely has some history to it, being that when you match the dates of town occupation and provenance info on AJS, they simply do not correlate. This gorget was most likely a product of a post occupation return to the site for burial for an individual who originally lived there. If this piece could talk it would have a intriguing story of how it got into this site. James Blake of White Savage Trading has provided a great deal of information, viewed, handled, documented all of the specifics necessary to get this object as close to the original as possible.

Copy and Photo by Ward Oles At the Eastern Door.
Posted by Contemporary Makers at Thursday, April 02, 2009