Scott Summerville is an excellent knife smith.  His most popular product is his authentic 18th century folding knives.  The 18th century traveler carried his own knife.  Taverns and public houses did not furnish cutlery.  Provisions came in chunks, slabs and sausages; and the baker did not slice your bread. This knife has a bolster copied from an original that is believed to be Dutch.  The blade has an 18th century flared tip, where the tip is slightly wider than where the blade meets the handle.  The style of the finished knife is appropriate for the second half of the century, or even a bit earlier.

The scales are made of kingswood and are cut using an 18th century method to make the grain stripped.  Scott discovered this method in a knife maker’s book printed in 1771.  It makes a spectacular looking handle.  Scott’s knife assembly and fitting are always the best quality work. This is a fine example of a gentleman’s knife, and not cheap trade goods.

Scott is a long time CLA member and regular auction supporter. He appreciates the CLA and the opportunity it offers artists for camaraderie, marketing, and recognition. 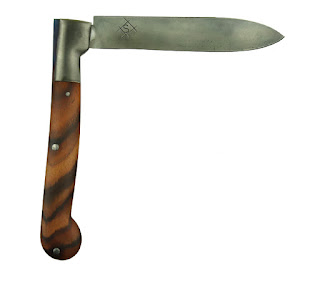 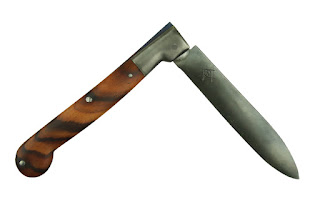 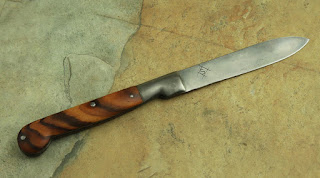 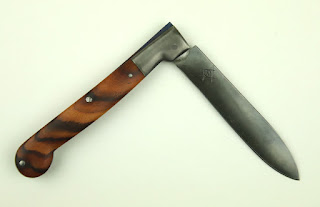