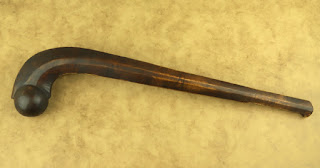 Traditionally, works of art have often served to make powerful political statements. Moravian missionary John Heckewelder, who spent a lifetime among the Delaware of the Ohio country, described one such grim tradition among the western tribes. In rectifying an insult, revenging war parties would penetrate their enemy’s country, unleash an ambush, and then leave a war club at the scene of the attack. “This war club,” explained Heckewelder, “is purposely left that the enemy may know to what nation the act is to be ascribed,” and if measures were not taken to secure a peaceful resolution, “war will forthwith be declared.”

For this year’s CLF Fundraising Auction, Virginia artist Lawrence Reed created a beautiful ball headed war club that pays homage to the tribal craftsmen of the past. The overall design, he explains, is inspired by Shawnee examples of the eighteenth century. The artist started the project with a seasoned blank of solid ash, which was then shaped, carved, and finished entirely with hand tools. The club, measuring 22 inches in length, exhibits a richly aged patina, which Reed achieved with a batch of homemade black walnut stain and a fair amount of elbow grease.

Reed, a veteran artist who’s been collecting and crafting contemporary art of the longrifle culture for over a half century, has created an exceptional piece of art fit for the reenactor or collector. His efforts have resulted in a crudely effective weapon of war that nonetheless sports a fine finish and graceful lines. 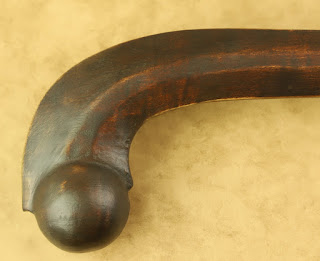 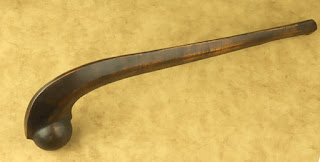 For more information on the work of Lawrence Reed, contact the artist directly: lawrencereed14@gmail.com