For the 25th Anniversary of the Contemporary Longrifle Association, CLA craftsmen have produced some of the finest artwork to be offered in the annual fundraising auction. A truly exquisite offering this year is a fine gentleman’s pistol by one of the best makers working today: James Turpin.

Working largely with reclaimed materials, Turpin created a masterpiece. This early handgun, explains the artist, could be considered “either English or American” as American gunsmiths routinely mimicked the work of makers from the old country.

Starting with a humble blank of Missouri Ozark Walnut, Turpin shaped a graceful stock and married it to a barrel which was salvaged from a badly rusted barrel from an old .45 caliber rifle. The artist re-bored and then hand-swamped the barrel into a .50 caliber smoothbore. The pistol’s furniture was crafted from beautifully figured Damascus steel which was salvaged from an old Belgian shotgun. All of the Damascus furniture was hand-forged, which Turpin explains was “the real challenge” in the project.

Despite the challenge, Turpin, a seasoned artist with forty years of experience, succeeded in creating a stunning collector’s-grade pistol. Fitted with a Chamber’s small Siler lock which was modified to resemble a London import lock, the pistol is further adorned with graceful silver wire inlay. The gun’s wrist, appropriately enough, sports an engraved German silver cartouche that commemorates the CLA’s 25th Anniversary.

Turpin explains that the annual CLA show “is the greatest gathering of America's best artists.” But like any accomplished artist, Turpin strives to continually hone his craft. “This is a time for me to grow as an artist,” he says, “I have met some great people there and made many new friends. Keeping this tradition of the American art and culture of our history is my goal.” 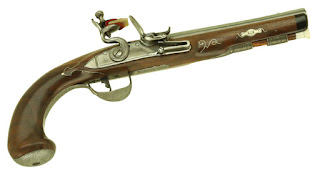 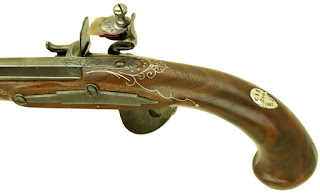 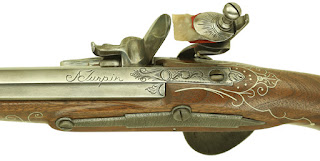 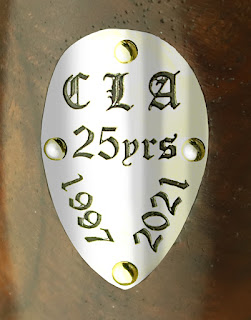 For more information on the work of James Turpin, contact the artist directly: turpins@everestkc.net