This Fusil de Chasse, or hunting musket, contract of 1729 and 1734, was purchased in the early 1960's by Walter O'Connor as part of a large varied collection of antique arms assembled by a long-time auctioneer in New Jersey. The man he had purchased it from has always held it out of the guns for his personal collection. Although the history is unknown Walter felt that it may have been brought home by own of Captain Hezekiah Dunn's New Jersey Ranging & Co. after their service on the New York Frontiers between 1756 and 1760. Walter kept it for two years before selling it to his good friend West White, then 30 years later bought it back from him. When Walter acquired the Fusil it was in as-found and untouched condition but was missing 15-1/8" of the forend and its ramrod. Carl Pippert professionally restored the missing wood and found an original ramrod to fit the gun. The two ferrules closest to the muzzle were professionally made by Carl and are a perfect match to the existing originals. The restoration is so well done that if Walter had not recorded this information, one would have a very hard time discovering it. The barrel has not been lengthened and the lock remains in its original flintlock configuration. The gun remains in untouched, dry attic condition and has never been cleaned in any way. By Walter's count there were originally 244 Wampum beads inlaid into the stock, some were obviously secured by red sealing wax. Of the original beads, there remain 152 full beads today and many other fragments which are not counted. This number includes the initials "IW" and the dated "1759". The Fusil itself features a two stage iron barrel with a small front sight and a groove extending from the tang into the breech. The flat lockplate is stamped "ATVLLE" in the center and stamped with a "D" at the tail. The lock is internally unmarked and on the exterior a crown over a Fleur-de-Lis is stamped below the pan. All typical French furniture is iron. The full length walnut stock is of typical early French form and profusely decorated with beaded designs, initials and date. A small piece at the toe was obviously replaced during the period of use of the Fusil. The wrist displays an attractive inlaid lead or pewter repair done early in the gun's life. A relief carved tear drop around the barrel tang surrounded by a punch-dot decorated border. The Fusil is in fantastic condition and retains a dark patina overall. There are various cracks and minor losses to the stock, all resulting from its use during the period. Original and authentic examples of early French Fusils are extremely rare with only a few authentic examples with bead decoration known to exist. Also included is a great deal of research on early French Fusils and trade guns, including copies of many articles and other beaded examples. There are hand-written descriptions of the gun written by Walter O'Connor and a copy of "The Fusil de Tulle in New France 1691-1741" by Russel Bouchard. 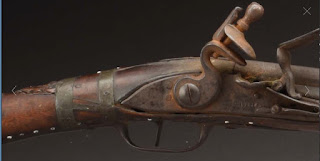 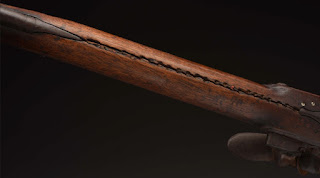 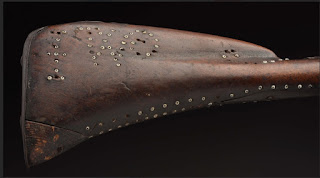 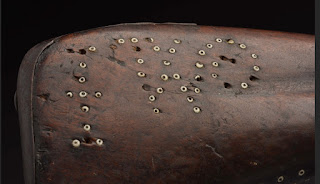 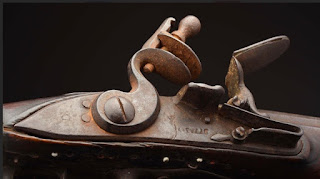 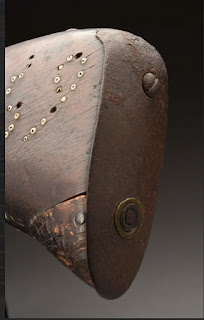 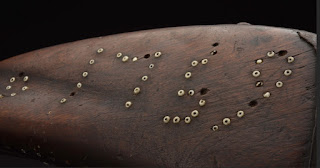 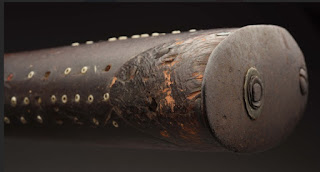 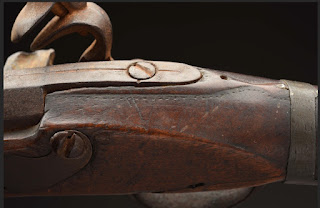