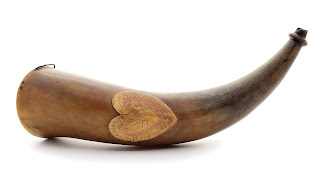 This horn is featured in plate 28 on page 31 of "American Engraved Powder Horns: The Golden Age 1755/1783" by John S. du Mont. The horn is also featured as No. 7 on pages 129 and 131 of "The New England Gun" by Merrill Lindsay. Captain Abraham Foot has an extensive French and Indian War record and was from Branford, Connecticut. He served in every major campaign of the French and Indian War, enlisting in 1755 in the Second Regiment of Elizur Goodrich in the Third Company under Major Isaac Foot. He enlisted again in 1756 in the Fourth Connecticut Regiment under Colonel Andrew Ward, Jr. in the First Company of Colonel Ward. He served under Ward at Crown Point. He reenlisted as an ensign in 1757 in Colonel Lyman's Regiment, Second Company under Lieutenant Colonel Whiting at Fort Edward. He quickly advanced to the rank of captain by 1762. The horn itself has a tapered curved body of about 13 1/2" long with a relief ring carved at the spout and a convex wooden plug secured by seven wooden pins. There is an iron staple for strap attachment at the end towards the plug. The main body features a heart in high relief inscribed "Cap't Abraham Foot's Horn Crown Point oct'r 5th" and large "17 / 62" in the center. The fine engraving is that of a trained professional engraver. his is a very historic horn with a remarkable provenance. Copies of the pages featuring this horn in both books is included, as well as a copy of the auction description when it originally sold as Lot 600 on October 12, 2006 in Bourgeault's Sale of "The William Guthman Collection of Americana".

CONDITION: Horn retains an undisturbed surface and is in very good condition with one minor chip at the spout opening. Relief heart shows clear engraving and retains a pleasing dark honey patina. Plug is original, showing some scuffing. 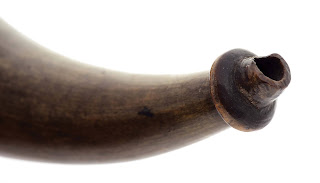 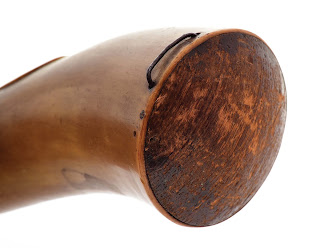 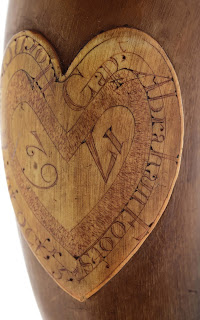 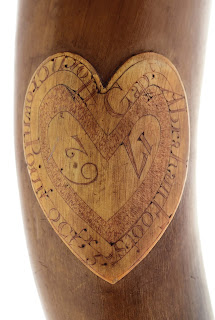 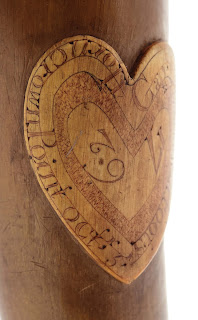