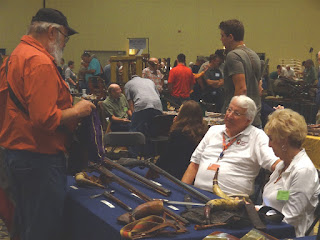 William Huey Ruggie and Gail Ruggie
"Bill" passed away early Saturday morning, November 26, 2016. Bill was born June 19, 1936 in Philadelphia, PA though he considered himself a native Floridian as most of his 80 years were spent in Florida. He graduated from Fort Lauderdale High and went to The University of Florida on the school's first-ever full swimming scholarship. Soon after graduation, Bill moved to Clearwater, FL and opened a State Farm Insurance agency, which he would run for nearly 50 years. Bill was an avid outdoorsman and, among his many diversified interests, a collector of contemporary long rifles, antiques and classic cars. Bill is survived by his wife, Gail; his children, Paige (Johnny) Chassie, Tom (Kim) Ruggie, Kelli Ruggie and Garth (Polly) Ruggie; three grandchildren, Gina, Christopher and Shane; a loving sister, Thene Castle and two nieces, Kim Patterson and Kris Turner.

Eternal rest grant unto Bill, O Lord, and let perpetual light shine upon him. May the souls of the faithful departed, through the mercy of God, rest in peace. Amen.