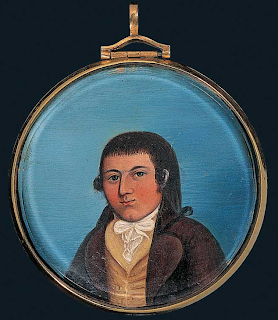 Joshua Winsor was one of the most influential citizens of Duxbury, Massachusetts. With his brother, Nathaniel, Ezra Weston Sr., and Samuel Delano, he was instrumental in establishing the city as a shipbuilding center after the Revolutionary War. By 1787, sixty-four Great Banks fishing vessels were in commission, and Joshua and Nathaniel were successfully engaged in mackerel and cod fishing. The Winsor wharves were the first to be built in Duxbury specifically for business. Rufus Hathaway portrayed Joshua’s home, wharves, and warehouses for drying and storing salted fish in 1793 or 1795—these structures represented just part of the extensive properties owned by the Winsor family in the Snug Harbor area. This painting is now in the museum’s collection (see Early Landscapes & Seascapes).

Because of its size and central location, visitors to the town sometimes stayed in the Winsor home. One guest may have been Rufus Hathaway, who rode into Duxbury in 1793, when he painted at least ten portraits, six of them for the family of Ezra Weston. He may have portrayed Joshua Winsor and his wife at this time as well. Hathaway was born in Freetown, Massachusetts, and was probably painting professionally by 1790, when he is documented in Taunton by the dated portrait of Molly Wales Fobes. In 1795, the artist returned to Duxbury to portray Winsor’s daughters, one of whom, Judith, he married later that year. Soon after his marriage, Hathaway became a physician, possibly at the prompting of his father-in-law. Although his primary occupation became medicine, Hathaway continued to paint occasionally until 1808, making and painting his own frames; this miniature on ivory of his 17-year-old brother-in-law, Thomas, was painted in 1797. In 1822, Hathaway was made an honorary fellow of the Massachusetts Medical Society, and it is as a physician that he is remembered on his headstone, in an epitaph that he himself may have composed. 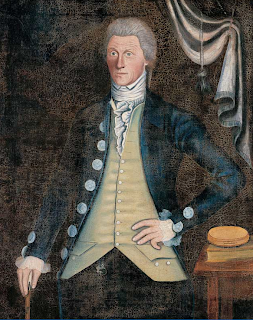 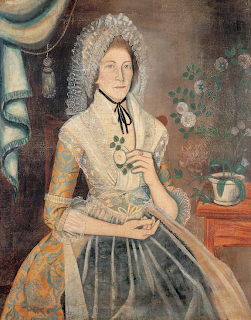 Marriage was a primary occasion for commissioning portraits through the middle of the nineteenth century. James Blakeslee Reynolds (1754–1834) and Mary Kimberly Thomas (1754–1833) were wed about 1788 and were probably painted then; their first child was born the following year, in 1789. Each is shown in the separate sphere determined by their gender. Mrs. Reynolds is seated in a fiddle-back chair, her receptive pose belied by her direct and determined gaze. She wears a beautiful, figured open robe over a dark petticoat; a lace shawl crosses over and is tucked into her waistband, and an elaborate lace cap with lappets tops her hair. She holds a rose to her bosom in one upturned hand, and a pot of flowers in bloom sits on a table beside her, drawing upon emblematic traditions associated with love and fruitfulness. Even so, both Mr. and Mrs. Reynolds are painted without sentimentality. Lines creasing their foreheads and the sides of their mouths hint at a sense of humor and make their otherwise severe and masklike faces unusually expressive.

The portraits may have been painted by Reuben Moulthrop, an East Haven, Connecticut, artist who achieved renown for his waxworks of full-size figures arranged in tableaux, which were displayed throughout Connecticut, in New York City, and as far away as the West Indies. The portraits of the Reynoldses show the influence of John Durand, who painted in East Haven, New York, and Virginia. Some of the conventions associated with Durand's portraits are evident in the portrayal of Mrs. Reynolds: the hand raised to her breast and holding a rose, the other arm crossing at the waist, and the careful disposition of fingers, with their delicate fluttering. Heavy outlining describes hands and clothes and suggests the overlapping of three-dimensional forms. An attempt to place the figure in spatial context is seen in passages such as the black ribbon around Mrs. Reynolds's neck, which recedes behind the sheer gauze of her shawl.