The Prodigal Edge by Heinz Ahlers with Scrimshaw by Glen Mock

I made this knife from a file back in 1975. It was all hand work with files and stones; both my eye and grip were better then. A friend, now long gone, arranged to have a young artist he knew do some scrimshaw on the handle for me, since the shiny butt and side of the handle just seemed to call for something. I moved , about 5 times since then, Glen, the young artist moved about 3 times and we were far out of touch. But, Glen held on to it knowing that sometime we would cross paths again. The primitive world is not all that large is it?  This year we were both working on the Contemporary Longrifle Foundation Annual Auction. Glen is a contributing artist, I am a one of the helpers on organizing the auction.  Glen said he still had the prodigal son, as he called it. What a great guy. He also makes much better knives than I do and you will see one of them soon on the CLF Auction site.
This is my wife's favorite knife. Picked up a nice patina in its 38 years of travel. 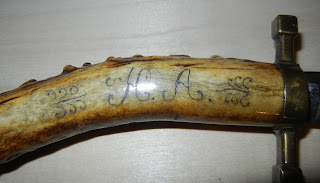 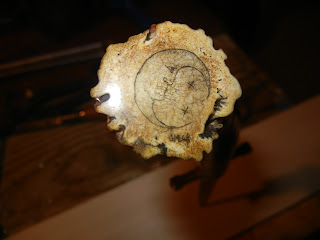 Copy and Photos by Heiz Ahlers.
Posted by Contemporary Makers at Tuesday, April 02, 2013