This grand pistol project took almost three years to complete, starting with Earl hand-forging the wrought iron barrel in 2006, during his 73 year of life. As Earl says "it set the shape for the overall architecture of the entire piece". The lock at first glance is a Chambers Queen Anne, but is unique in that the plate is cast of Sterling silver. It was assembled by L.C.Rice and then engraved by Jim Chambers. All other artwork and engraving on the pistol is from the heart and soul of Earl Lanning. Signature elements of design found on rifles he's produced through the years are pleasingly brought together in this concise artistic statement. The sideplate is almost identical to one found on the rifle he calls "Genesis" the first wide-butted Revolutionary War period rifle that he made in 1961. His "Man-in-the-Moon" face, the Indian on the thumb piece, are all familiar designs, yet the Phoenix Bird rising from the Flames engraved on the bow of the trigger guard and the little "fiddler" on the butt-cap are new to this innovative work of art. Earl sculpted a wax pattern for the casting of the sterling silver trigger guard with bold fleur-de-lis finial designed to matched the carving behind the tang that is borrowed from the work of George Shroyer, a maker that has influenced and intrigued Earl from his beginnings. The sideplate and thimbles were formed from sheet silver, with the thumb escutcheon and large butt-cap being fashioned from silver coins.

This pistol joins the rank of 23 other Contemporary Artist that will be represented in an exhibit of flintlock pistols at the Contemporary Longrifle Association show at Heritage Hall, Lexington, Kentucky August 14th.and 15th., 2009. 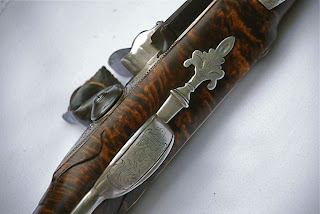 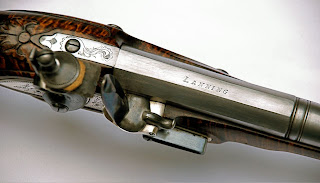 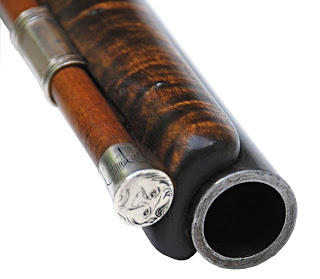 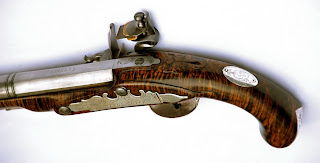 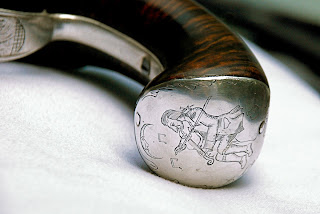 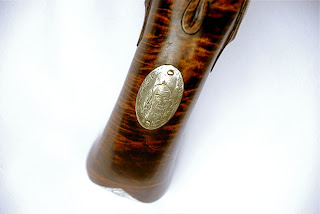 Copy and photos by Mel Hankla.
Posted by Contemporary Makers at Tuesday, July 14, 2009