The artistic duo of brothers Wayne and William Fluke routinely garner a good bit of appropriate attention at the CLA Annual Show. The Pennsylvania artists regularly exhibit a stunning display of powder horns, carved European powder flasks, carved knives, and decorated boxes that are entirely unique for artisans of the longrifle culture.

At this year’s CLF Fundraising Auction, bidders will have the opportunity to acquire a stunning gentleman’s walking stick by the Fluke brothers. Initially planned for sale in the 2020 auction, this piece has been held over for another year, and is a special offering for the CLA’s 25th anniversary.

The artists skillfully married frontier and equestrian themes, resulting a truly remarkable work of art. The cane was crafted from cherry, and sports an intriguing series of pithy frontier sayings which Wayne carved entirely by hand with chisels and knives. The diminutive carving features several quotes - including three attributed to Daniel Boone - which read as follows:

Heaven must be a Kentucky kind of place – D. Boone

I never was lost in the woods in my whole life – though once I was confused for three days – D. Boone

All you need for happiness is a good gun a good horse and a good wife – D. Boone.

The background of the lettering was darkened with ink, and the body of the walking stick was then given a coat of stain and four coats of sealer. The bottom of the cane is fitted with a protective tip which was handmade from steel rod.

Bill’s considerable skills are on full display on the cane’s handle. Starting with a blank of moose antler, the artist hand carved a remarkably realistic horse head, which was then fitted with glass eyes for a bit of color contrast. A copper band is fitted near the top of the cane, which was engraved by artist Mark Thomas to read “CLA 25th Anniversary.”

“We’re blessed to be part of a great group of people with common interests,” the artists explain, “and we want to show our support to the CLA and all it stands for.” 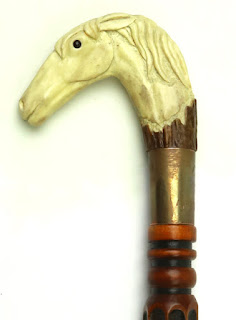 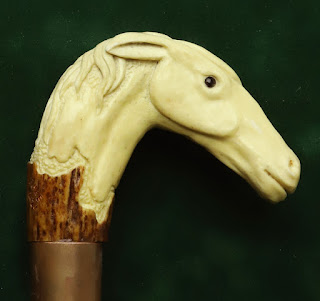