This style of low-crowned, round hat of black felt made of a mix of wool and fur, hand-blocked and well-stiffened with a mixture of shellac and alcohol and possibly wax. It was the type commonly favored by both American and European sailors during the last quarter of the 18th century and into the first decade of the 19th century, then enjoying a brief resurgence in popularity during the mid-1820s-1840s. However, this fine example from New England is believed to be from the earlier period, based on the form of its crown, which was blocked on a round or circular crown, as opposed to the oval crown blocks which began to proliferate in the early 1820s. This hat is nearly identical to another in the personal collection of noted antiquarian William Guthman that was sold by Northeast Auctions at his estate sale in 2006. With late 19th century hat or wig stand of wire. 2 pieces.

CONDITION: Good to very good, but lining missing, some ingrained dust on hat crown and upper side of brim and slight chipping to the edge of the brim. JLK Illustrated and discussed on pp. 194-195, where it is incorrectly described as being of "tarred leather"(felt hats during this period were sometimes japanned or tarred, but this hat shows no sign of such topical applications). 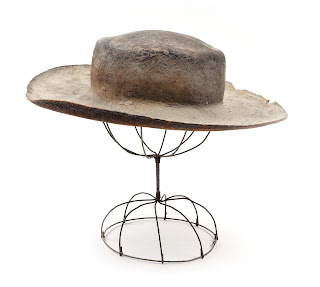 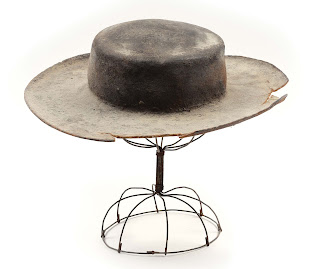 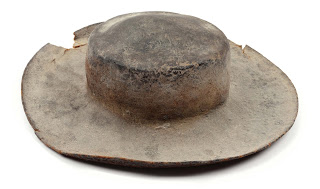 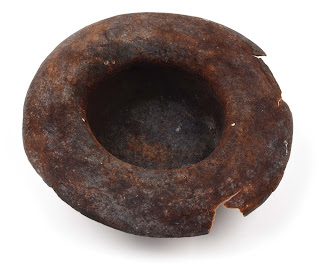 Copy and photos from here. 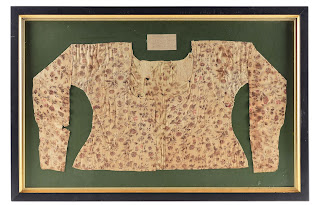 An extremely rare, 18th century, woman's short gown of block-printed linen, an everyday utilitarian garment of the working to middle class, pressure-mounted in frame. An old label, attached to the rear of the frame, is inscribed: "This Garment was called "A Short Gown" was worn with a petticoat. Very early hand-printed Calico--supposed to be of about 1730-1740. Belonged to some one of the Stephen Robbins family of East Lexington, Mass." While the garment's provenance may be correct, the short body (back panel 16 in. L at center, front panels 10 1/4 in. L at breast edge) and full-length sleeves fitted closely at the wrist, would indicate a date range of 1785-1805, rather than earlier. Both sleeves are heavily-pieced and this, coupled with the linen fabric utilized (a polychrome floral pattern, probably English, popular in the 1760s-1780s) suggests that the short gown may have been recut or "cobbled" from an earlier short gown or some other garment.

CONDITION: The gown shows evidence of period darning and patching repairs, but it appears to be otherwise in good to very good condition (not examined outside of the frame), the ground of the fabric now an ivory color and the printed floral devices with black (now brown) outline work, leaves and petals colored in green and pinkish red, respectively. JLK Illustrated and discussed on pp. 102-103 of "For Liberty I Live." 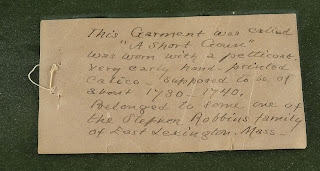 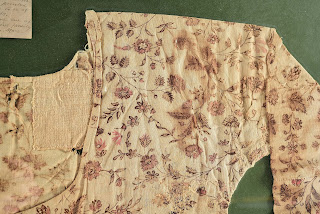 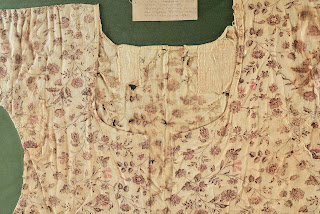 Copy and photos from here.
Posted by Contemporary Makers at Friday, May 22, 2020