These tomahawks were presented as gifts from King Louis XV to Indian Chief Allies of the French in North America during the Seven Years War. There are only approximately 8 examples known. Another example that is very similar with this date is in the Smithsonian and another is in the Bern Museum in Switzerland. Other examples are in museums in Paris, Scotland, and Canada. This example is shown in color in figure 16 on page 123 of "Tomahawks and Frontiersmen Belt Axes" by Daniel D. Hartzler and James A. Knowles. The tomahawk is also featured on page 23 of "Tomahawks and Pipe Axes" by John Baldwin and in "Accouterments (Vol. I)" by James R. Johnston. The known examples date between 1760 and 1763 with a few of the examples with illegible dates. The head measures 6-5/8" including the bowl, crescent cutting edge measures 2-3/4". The straight 1-3/8" bowl is has a brass overlay with gadrooning and a wedding band at the top. The right side of the eye's upper shoulder is inscribed "A R" and the opposite side is inscribed with the date "1760". The lower portion of the eye, towards the blade, shows a relief chiseled fleur-de-lis on the right side and an acanthus leaf in relief on the other side. At the top of the blade on the right side, there is a relief brass inlay engraved with a clamshell design, while the other side has the same inlay, only in silver. The top and bottom edges on the blade are ornately scalloped. The right side is engraved with a crescent moon, a star, a fleur-de-lis, a drum, cannon, and cannon balls, along with decorative borders. The left side features ornate borders, a fleur-de-lis and a sun in splendor with a silver inlaid circular center engraved with a face. The original haft has a brass band towards the mouth.

CONDITION: Excellent, overall. Head retains an even pleasing grey patina, showing a few microscopic nicks to cutting edge. Inlays are well-patinated. Engraving is all excellent and inscriptions are clearly visible. Haft is original and shows some shrinkage, head slightly loose. There are a few scattered marks from use and a minor age crack. This is an extremely important French and Indian War tomahawk with fantastic provenance.

PROVENANCE: Originally brought to Glode Requa by an English picker in the 1960's, where it was probably brought back by a British officer as a war trophy. It was later owned by Walter O'Connor and Bill Grimmison. Later purchased in 1995 by Dave Kleiner with others from a collection of the best tomahawks known. It was subsequently sold to Marvin Lince of Oregon for $85,000. The piece was later sold to a noted collector who also owned the Butler Tomahawk. The tomahawk includes a binder with information, photos and descriptions of the other known examples, copies from books featuring the piece, professional photographs of this tomahawk both by itself and with the Butler tomahawk, and a letter of provenance from Dave Kleiner. 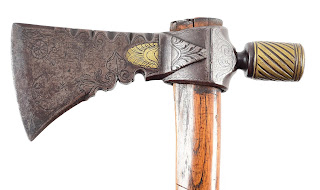 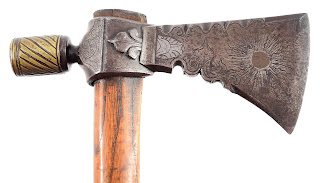 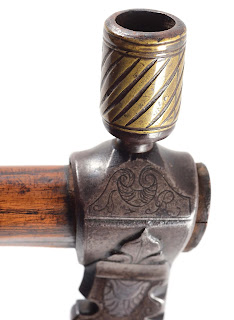 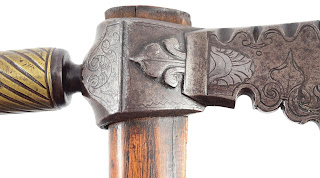 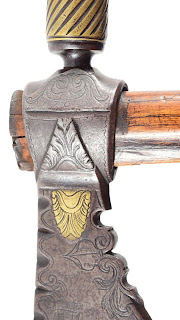 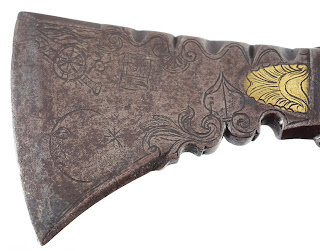 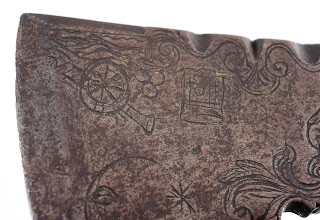 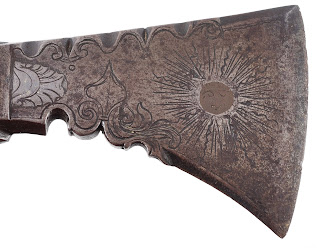 Absentee Portion Of This Auction Is Open For Bidding