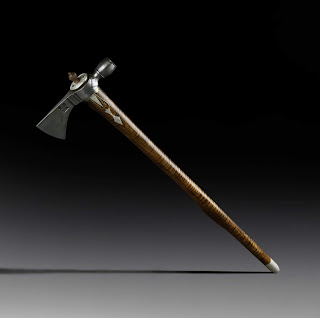 Length 21 1/2" Head 5 1/2" tall.
The name tomahawk is a combination of tribal and English words. Algonnquin and Renapepeoples called their lightweight axes "tamahak," "tamahakan" European Americans pronounced these words as "tomahawk." They liked the size and weight of the original tool, but made their own adaptation by replacing the stone heads with iron heads having steel blades. Tribes who had never seen a tool with a wooden handle and metal head called it a tomahawk, adopting the European American's term.
In the early 1700s, Native Americans or European Americans adapted the original tomahawk into a new form known as the pipe tomahawk. The original tomahawk is an Indian tool with a wooden handle and a metal blade. What differentiates a regular tomahawk from a pipe tomahawk is its head, which consists of a cutting edge on one side and a pipe bowl on the other. Pipe tomahawks could be used for smoking and chopping when necessary, but they usually were more symbolic than practical.
Pipe tomahawks also are a mix of Old World and New World products. The majority of these tools were made in North America. Their handles are of native woods and their axe blades were metal. Blades were usually iron with a steel cutting edge or, if not intended for cutting, they were made of brass. Some of the heads and handles were decorated with silver, pewter, lead, brass, and copper inlays.
European Americans traded pipe tomahawks with native peoples during the fur trade era, from about 1650 to 1870. European Americans also presented pipe tomahawks as gifts in diplomatic agreements and treaty signings with tribes. Joseph Brandt was painted with one in his 1776portrait by George Romney; Tecumseh had one presented to him by Colonel Proctor. Lewis and Clark took 50 pipe tomahawks with them on their 1803-1806 expedition to trade or present as gifts.
When three noted CLA blade artisans get together on a project, it is certain something special will result. This year Simeon England, Mike Miller and Kyle Willyard have produced an outstanding pipe tomahawk. Historically correct in its features and embellishment, this is a significant display of exceptional work of these three talented artists.
As you can see from the photos, this pipe tomahawk is created with the correct architecture and materials. The knife inlay on the right side of the blade on the hand forged head is historically correct, appearing on an original pipe tomahawk attributed to John Small of  Vincennes. Sterling silver has been used for the haft cap, mouthpiece and inlay and the engraving is ‘top drawer’. The haft is a fancy piece of curly maple and features a flange for a wrist strap. Look closely at the attention to detail, including the engraved silver mouthpiece and the carved wood clean-out plug. 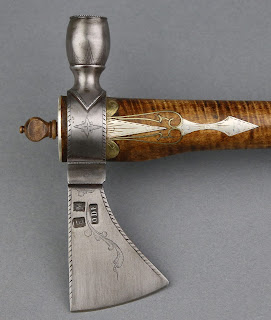 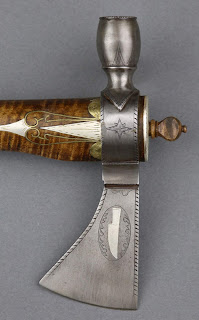 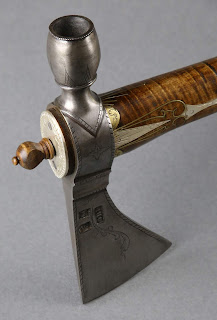 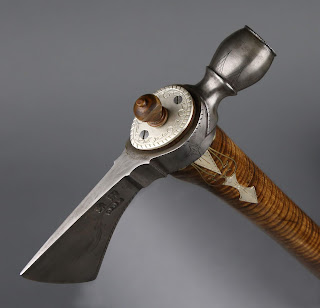 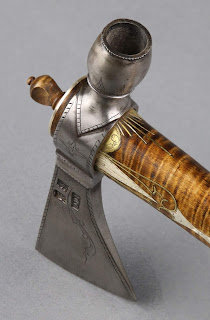 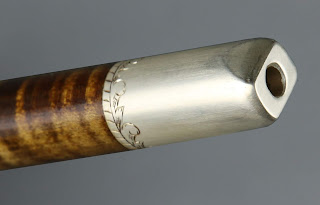 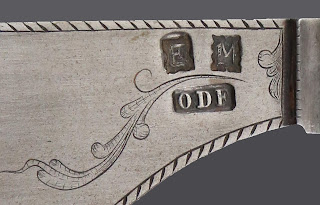 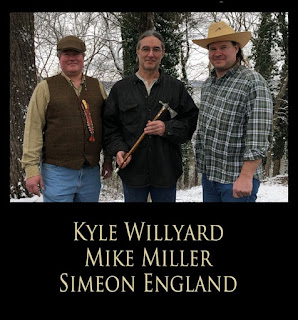 The CLF Live Fund Raising Auction has a history of offering fine presentation pipe tomahawks, but they do not come up every year. This is one of that select group and this year is your chance to own one.

Posted by Contemporary Makers at Tuesday, May 26, 2020