Young people on the frontier went about armed from an early age.  In  “Thoughts on Kentucky Rifle in the Golden Age” Joe Kindig Jr. shows a 30 inch barreled youth’s rifle he attributes to Wolfgang Haga.  This is an early gun with a brass box and raised carving.  Kindig also notes that he owned another boys rifle by Fredrick Zorger dated 1805 that was engraved and had a patchbox.  Nathan Boone related killing a deer with a rifle in 1793 when he was 12 years old.  He also stated he had a smaller “bird rifle" before that.  (We have what is very likely a copy of Nathan’s deer rifle in the auction donated by Ed Fish.)  So in addition to cut down, old muskets we know that some lucky young people received some classy purpose built firearms.

The diminutive flintlock is one of this guns most striking features.  Carefully crafted in an English style, the lock is perfectly sized for the rifle, and it is lightning fast.

This smooth rifle has engraved brass furniture, raised carving on the highly figured maple stock and a nice patchbox. Terry Methe’s signature is engraved on the barrel. This nicely made rifle will probably make a life-long shooter out of some lucky young person. 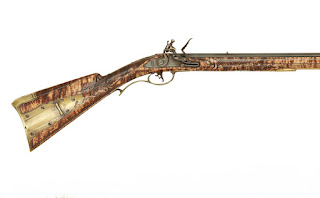 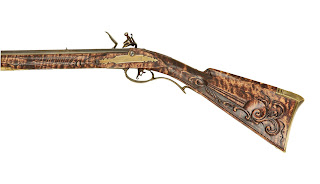 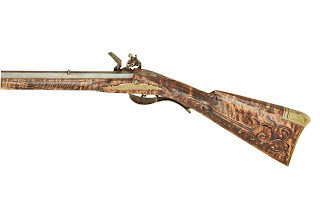 Copy by Heinz Ahlers with photos by Ric Lambert
Posted by Contemporary Makers at Sunday, July 16, 2017