This unsigned Southern Mountain longrifle is attributed to G. Huddleston. This rifle is stocked in oil finished curly maple and trimmed in hand forged iron furniture. The iron furniture, straight octagon barrel, and cosmetically altered large Siler lock are finished to a gray-brown patina. This a fine reproduction of tool from the mid 19th century.
The .50 caliber barrel is 15/16" octagon by 42" long. The bore is cut rifled with seven lands and grooves with a slow twist for a tightly patched round ball. The bore is bright and clean. The barrel is finished to a gray brown patina, with no glare, no shine.

The curly maple stock has attractive figure in the buttstock and fades to straight grain through the lock panels and forearm. The buttplate is formed from sheet stock that has been bent to shape and forged together at the heel. The lock panels have a rather unusual appearance found on some Appalachian rifles, which may look unusual compared to a Pennsylvania longrifle. Trigger reach is 13-3/4", to perfectly fit today's average size shooter. Weight is 9.1 pounds. 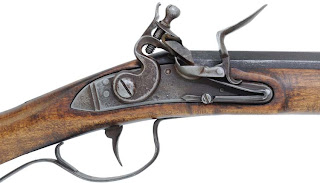 Copy and photos supplied by Track of the Wolf.
Posted by Contemporary Makers at Sunday, February 27, 2011