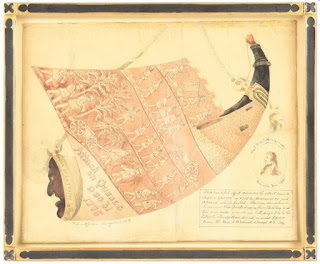 According to the New York State Library, "Rufus Alexander Grider was born April 13, 1817, in Lititz, Lancaster County, Pennsylvania, a town founded by members of the Moravian Congregation in 1756. Grider's ancestors came from Switzerland and Grider was confirmed in the Moravian Church. Census records show the Griders lived in Bethlehem, Pennsylvania from 1870 to 1883, when he moved to Canajoharie, Montgomery County, New York. He taught art at the Canajoharie Academy until his retirement in 1898. Rufus Grider died February 7, 1900. The Rufus Alexander Grider albums of his pen-and-ink sketches and watercolors were acquired by the New York State Library in October 1941 by special funds made available through the bequest of the late William Charles Gotshall. Initially Grider drew views of buildings and landscapes, then Indian relics and finally "any object suited for illustration," including documents, which he "copied by tracing, making a coplete [sic] duplicate of the original". From 1886 to about 1900, whenever his "school duties allowed," Grider traveled up and down the Mohawk Valley with occasional excursions to the Cherry and Schoharie valleys and Lake George and Lake Champlain, in search of historic buildings, battlefields, the sites of ancient forts, the relics of Indians and early settlers, all of which he drew or copied and then arranged with explanatory notes on pages of albums. In the October 1, 1888 preface to Volume I, Grider states the object of his work was twofold: "to preserve the memory of very many interesting objects of this locality which might otherwise be lost – and 2d, for the pleasure such researches gave me, the greater the difficulty of solving a mystery, the greater the interest". By the time of Grider's death in 1900, he had compiled nine volumes containing 1,041 pieces, including 623 water color sketches, 42 water color portraits, 169 tracings of manuscripts, 81 original engravings, seven original manuscripts, 71 tracings of maps and plans, 23 photographs and 25 water color drawings of powder horns. Almost all of the originals are housed at the New York State Library and a couple other institutions. This rare original drawing measures 13" x 10-1/4" excluding frame. The black and gilded frame measures 14-7/8" x 12-1/4". The horn is hand painted with watercolor and signed below "Rufus A. Grider, Canajoharie, N.Y." near the left corner. To the right of the horn, below, is a portrait bust of "Genl Richd Montgomery/Born 1736. Died 1775" above a caption written by Grider that reads "This beautiful object celebrated the attack made to capture QUEBEC in 1775 by MONTGOMERY and ARNOLD, which failed. The horn shows how forces went thro. forests draging their artillery and then over rocky grounds up hill, single file to the Citadel. The objects are carved, or raised figures. Owner Dr. Thos. S. Hitchcock Oswego, N.Y. 1889".

CONDITION: Shows some tears and creases along with minor fading and slight staining. A rare opportunity to own one of the very few Grider powder horn drawings that are in private hands.

PROVENANCE: Includes a letter on Bill Myers' letterhead signed and stating that he purchased this from Tom Wilson at the 2000 Kentucky Rifle Association Annual Meeting. The letter states that it came from the Collection of Herman Dean and that Tom Wilson had it for 25 years prior to selling it to Bill. A copy of a record and photograph of the original horn is included. The horn is located in the National Museum of Man/National Museums of Canada. There is also a document in regards to the document's cleaning and stabilization. 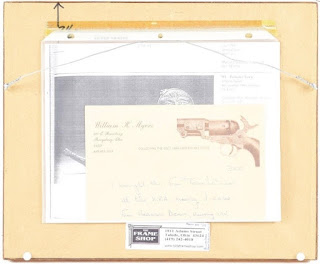 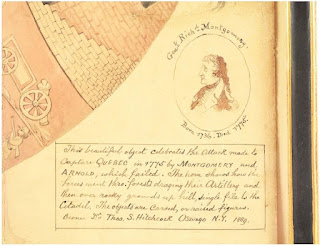 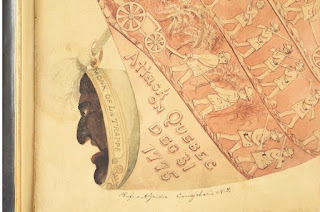