This piece poses somewhat of an exercise in interpretation as it displays multiple layers of what I believe to be secondary work.  Apparently, it began life as a long-barreled ’bear pistol’ made somewhere in the south; South Carolina or northern Georgia have been suggested, but possibly it was made somewhere further south and west such as Alabama.  This remains somewhat of a mystery!  The lock mechanism has been identified as that of a 1798 Austrian cavalry pistol, although the frizzen is an old period replacement (slightly undersized) and the plate tail was rounded when the lock was recycled and restocked in its present form.  Manufacture during the second or third decade of the 19th century seems somewhat appropriate and it has never been converted to percussion.

The seventeen inch, .50 caliber barrel is exceptionally long (for a pistol).  Since it might have been typical to use such a lengthy pistol two-handed, it would seem that early in its working life a short shoulder stock was added.  This shoulder stock was not meant to be removed, for it is quite permanently affixed.  Both pieces (stock and pistol) are of relatively plain red maple and given the similarity of wood and color, I strongly suspect that the same stocker made both.  One interesting characteristic of the shoulder stock is that while it is sans buttplate, short pieces of harder hickory or hornbeam were glued and pegged into the comb and toe as a protective measure.  The shaping of both the pistol and the shoulder stock, while simplistic, is very competent and ‘flows’ well, and there is even a small degree of cast-off incorporated into the shoulder stock addition.  The cheekpiece is prominent and well-formed, and a five-pointed star has been cleanly relief carved.

I suspect the piece was originally stocked somewhere where metal was scarce.  The lock displays secondary usage at the time of stocking, and possibly the barrel likewise was cut or taken from a longer rifle barrel.  It does carry a slight taper, measuring one inch at the breech tapering down to approximately .930 at the muzzle.  There is a ‘swale’ or dip in the upper flat where a typical rear sight may have been located and subsequently removed, and the simple peep sight was clearly added later along with some crude punch stampings on the upper flat.  The largest piece of metal hardware anywhere on the piece is the iron strip utilized for the triggerguard.  The silver inlays are nicely installed and surely were made from coins, and the single brass rammer pipe is thin and straightforward.  No sideplate is present but small pieces of brass were used as washers while a thin piece of iron was used as a grip cap.  Likewise, the shoulder stock originally carried just a simple iron strip used as a portion of the reinforcing attachment; it is predominantly attached with what appears to be a very large lag screw running through the pistol grip and far into the stock.  The pivoting box lid is of the same wood and workmanship, and works by means of a small spring strip.

At a later point in time, another individual appears to have had access to a quantity of thin brass sheet and ‘went to town’ making two moon inlays, a vent pick holder and a full wrist wrap/repair.  These clearly were installed by a different, less-experienced hand than the inlays cleanly installed on the pistol proper; these brass pieces are quite crude but wonderfully “folksy.”  Additionally, a cross-hatched moon was primitively scratched into the stock forward of the triggerguard.  Some of the retaining tacks present upon these brass inlays are clearly old repairs.

When viewed in entirety, this “carbine” ultimately presents a charming conglomeration of both professional and primitive work that has survived quite well and doesn't seem to have been subjected to excessively hard use.  It’s my understanding that long, so-called “bear pistols” were fairly unique to the south during the 19th century as bear hunting was undertaken with dogs and bears were treed.  A pistol was much more effectively carried in a speedy manner through rough, brushy terrain than a longer-barreled rifle could be carried, and shots at close range were the norm.  The addition of the short shoulder stock in this particular case is extremely effective and in conjunction with the peep sight seems almost a forerunner to the modern concept of a “brush gun!” 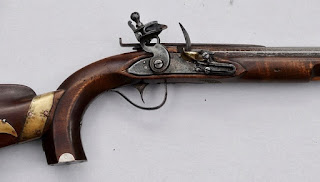 More photos can be found here.
Copy and photos supplied by Eric Kettenburg.
Posted by Contemporary Makers at Monday, October 05, 2020