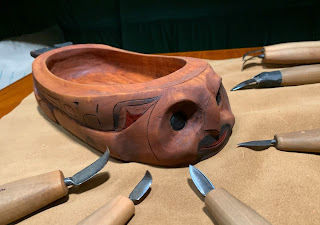 After a long time off due to circumstances I've started back into North West style carving, mostly Haida and Tlingit influence.
I started this by copying photos of museum pieces using offcuts and scraps from a boatbuilding school where I taught at the time.
Here's my latest job, a 'transformation' bowl as the type is called, showing a man transforming into an owl. It's curly maple, and a hard well seasoned chunk that was a real challenge to carve.
My pieces reflect traditional things that would have been household items at the time of white contact, circa 1770s. Later art of the area changed quite a bit and flourished on the making of tourist items like miniature totem poles and such but I like the early functional objects.
Second pic is some of my earlier efforts, most of which were lost in a shipwreck. Items on right are fish clubs.
Third is working from an illustration to duplicate a very old bowl, now lost. 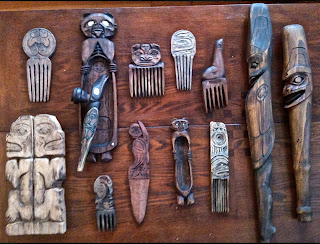 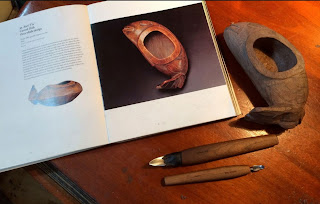 Very close museum reproduction of a 'salmon boy' fish trap stake intended to show the salmon respect and come into the trap.... 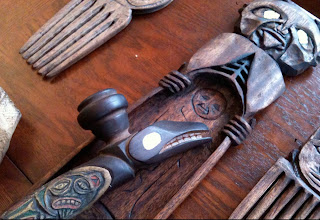