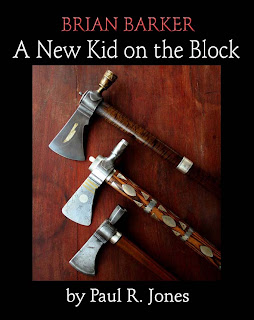 I like tomahawks! I always have, even when I was collecting Colts or Scottish swords, but I just never could afford them. Then, when I discovered that contemporary craftsmen were making them I got excited. Eventually I met the incomparable Richard Guthrie, of Virginia, dean of colonial blacksmiths. Richard is not only unsurpassed at the anvil, but he has a true love and understanding of pipe tomahawks. Owning a Guthrie is the next best thing to owning an original. 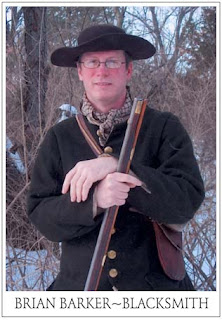 I also met Glenn McClain, whose technique, although different from Richard Guthrie’s, produced tomahawks that were spot-on to the originals. (See article in July/August 1999 Muzzleloader magazine)
And as you might expect, there is always “a new kid on the block.” If you watch the wonderful DVD The History of Tomahawks produced by Alan Gutchess, you will spot a young man working at the forge in one scene. That is Brian Barker from Belleville, Michigan. I first met Brian at the Sauder Village gun show some years ago. He had just finished a copy of Jim Dresslar’s Squire Boone tomahawk, not a tremendously fancy axe, but I was greatly impressed with the accuracy of his copy. I didn’t see Brian again until the Eastern Woodland Indian Conference almost a year later. There he had a fine inlaid copy of the tomahawk, on pages 101 and 102 in Jim Johnston’s Accoutrements I. Since then, Brian has produced a number of highly accurate copies of some of the most exciting originals around.
I think it is best to let Brian explain his love of tomahawks in his own words:

Reproduction of a silver and brass inlaid original tomahawk shown in the book "Accoutrenents" by James R, Robinson

Reproduction of an original with a brass bowl and silver inlay. 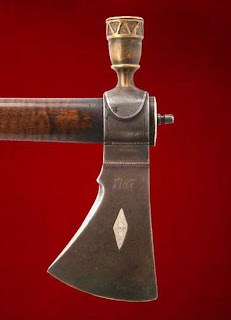 A close-up of the same tomahawk.
“My real passion is pipe axes, and I wanted one like Squire Boone had made. I met Jim Dresslar through Don Rettig and Alan Gutchess. He very kindly let me go through and handle his collection so I could see things close up and on every side. This is something books and videos cannot do – nothing beats looking at the real thing. I found a wrought iron gun barrel in an antique shop and used it for my first attempt. To my surprise it went together right the first time. Since then I have always used wrought iron for my pipe and poll axes. It welds great, looks right, and is what they used in the 18th century. I have some old springs that I use for the bits. Welding in the bit and not burning it is always the tricky part of making an axe.” Brian signs his fancy tomahawks “B Barker” and everything else with a “B” in an oval.
Brian is a self-taught blacksmith. An early attempt at making a knife from a saw blade without drawing out the hardness got him interested in blacksmithing. A worn-out riveter’s forge given to him by a great uncle got things started. All that was salvageable of that riveter’s forge was the blower. He made the rest from wood, clay, and pipe from a muffler shop. For pipe axe making he has had to make many of his tools and modify others for specific jobs. An article on blacksmithing by Joe DeLaRonde got him started, but Brian says the Hershel House tape on blacksmithing was the most helpful of all. “It seems like I learn better and quicker when I can see things done.” 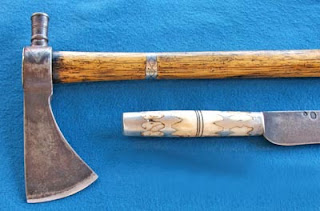 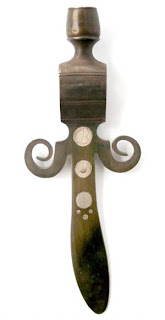 A copy of the original silver inlaid spontoon on the cover of  "Indian Tomahawks & Frontiersmen Belt Axes" by Daniel D, Hartzler & James A. Knowles. 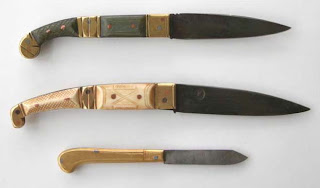 Two of Brian's folders along with the original (top) he uses for a pattern.
I don’t want this to sound like all Brian does is make pipe axes; he certainly does much more. Brian makes belt knives and fabulous 18th-century folding knives. He makes his knives from 1080 or 1084 plain steel, and the handles out of bone, horn, or wood. He chooses the harder varieties of wood, since so many people like to use the butt of their knives to start the ball when loading. "B" in a cartouche mark used in Brian's work.
Brian also does powder horns. Scott Sibley, probably the best known and most prolific producer of powder horns around, has been a teacher and inspiration in this area of his endeavors. Scott started giving him advice long before his book came out, but Brian says he has still learned a lot from the book. He likes to find horns sixteen or eighteen inches long with about a three-inch base, which he plugs with either pine or poplar. He tapers the holes in the mouth so they will let go of the stopper easier in wet weather. Brian engraves the horns with a knife he adapted by giving it a short blade for control and a steep bevel for a wider cut. 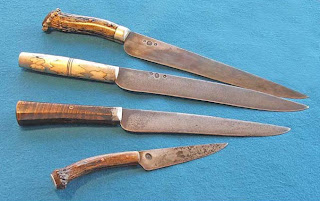 Three of Brian's belt knives and a patch knife.
Tomahawks, knives, and horns are not all you will see if you run into Brian at a show. He also makes carved antler powder measurers, pick and brush sets, turn screws, tow worms, and ball pullers.
Brian has been married to Susan for twenty years and has a fifteen-year-old daughter, Chelsea, who loves to hunt with him on their sixty-acre farm in Kentucky using muzzleloaders. He has worked over twenty-two years for the University of Michigan. In eight years he plans to retire and devote full time to blacksmithing. 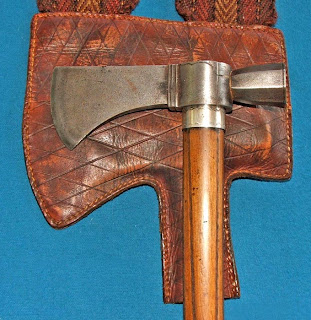 A copy of the Alexander Mckenzie axe and its original sheath.
Brian is a member of the NRA, NMLRA, and the CLA. If you would like to contact him about any of his work you can do so at squirehawk1774@yahoo.com or give him a call at 734-697-4274.
Copy and photos by Paul R. Jones.
Reprinted by permission of the National Muzzle Loading Rifle Association/ Muzzle Blasts magazine. For information on the NMLRA please visit the website.
Posted by Contemporary Makers at Monday, December 20, 2010