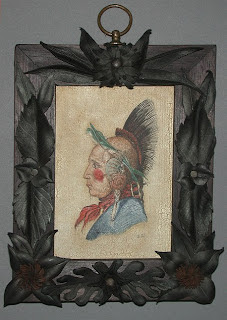 Is a water color painting on board of an Osage Indian. The frame is made of leather leaves and flowers that I molded and hardened by an old technique called "cur boulli". The idea of decorating with leather foliage was an 18th c. Spanish art form that became popular in England and the US in the mid 19th c. The original painting of the Osage was rendered by a French working over here in the first years of the 19th; he painted Jefferson and several other notables. S.L.

Photo by Karen Abercrombie.
Posted by Contemporary Makers at Monday, May 26, 2008