THE LONG RIFLE IN VIRGINIA & THE VIRGINIA SETTLEMENT TRAIL 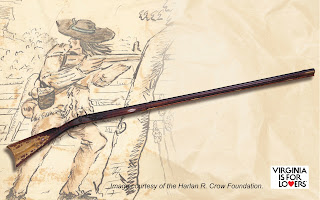 THE LONG RIFLE IN VIRGINIA

The long rifle was a surprise factor in winning American independence. A distinctive product of the backcountry of Pennsylvania and the Southern colonies, this celebrated rifle was essential for survival on the frontier.

“The Long Rifle in Virginia” will showcase more than three dozen curated long rifles and accoutrements from the 18th and 19th centuries that have never before been assembled in the same exhibition. The exhibition will explore the artistry of Virginia gunsmiths through demonstrations, a symposium, and a recreated gunsmith shop on location.

Individual gunmakers and some families of gunsmiths brought their own distinctive personalities to the process of rifle making at various locations along the “Great Wagon Road,” from Philadelphia to the mouth of the Shenandoah Valley near Winchester, to Southwest Virginia at Abingdon and through to the Cumberland Gap. Assembled from the collections of numerous long rifle owners and museums, “The Long Rifle in Virginia” will present a collection from early gunmakers to illustrate and differentiate the individuality of their work.

Wallace B. Gusler, renowned scholar on 18th-century firearms and retired Master Gunsmith, Curator of Furniture and Arms, and Director of Conservation at Colonial Williamsburg, noted that colonial American gunmakers controlled one niche of the gun market: rifle making. “The long rifle was the only gun made in numbers in America in the 1700s,” Gusler said. “During its time, it was the highest expression of the gunmaker’s art in this country.”

Explore the art and artistry of 18th and 19th century long rifle gunmakers throughout the Virginia backcountry in “The Long Rifle in Virginia,” on display at William King Museum of Art, April 1 – October 31, 2022.

“The Long Rifle in Virginia,” is part of the museum’s McGlothlin Exhibition Series.

A special thanks is extended to the Kentucky Rifle Association for their loan of the two central gun cases and to Highlands Glass for their donation of the glass for the four surrounding gun cases. 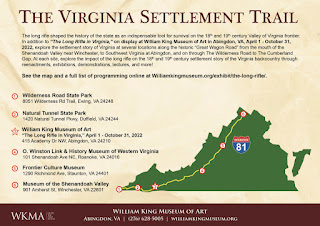 The long rifle shaped the history of the state as an indispensable tool for survival on the 18th and 19th century Valley of Virginia frontier. In addition to “The Long Rifle in Virginia,” on display at William King Museum of Art in Abingdon, VA, April 1 – October 31, 2022, explore the settlement story of Virginia at several locations along the historic “Great Philadelphia Wagon Road” from the mouth of the Shenandoah Valley near Winchester, to Southwest Virginia at Abingdon, and on through The Wilderness Road to The Cumberland Gap. At each site, explore the impact of the long rifle on the 18th and 19th century settlement story of the Virginia backcountry through reenactments, exhibitions, demonstrations, lectures, and more!

Join renowned expert Wallace Gusler for an in depth look into long rifle culture of colonial Virginia. Explore the powder horns, tomahawks and rifle accouterments of the legendary frontiersmen of the 18th century.

In London, fashion is the focus of the elite. Beaver hats and doe skin gloves are symbols of wealth and social standing. These fineries of London, however, are imported from Virginia. Meet with Mr. Henry Skaggs as he returns from the western side of Brush Mountain and explore the art and business that is  hunting the Virginia red deer.

• As The Hammer Falls

The blacksmith is one of the most important tradesmen on the frontier. With ties to England      severed, all imports to the American colonies have abruptly ended. Firelocks, swords, axes, and knives are now necessary but in short supply. Blacksmiths across Virginia are being called upon. Without their knowledge, skill, and willingness to serve, the hopes of Congress may be lost. Watch as the blacksmiths at Martin’s Station demonstrate their craft and talk about supplying a company at the onset of revolution.

By May of 1775, men, women, and children were heading west, deep into the harsh wilderness. They follow a trace that leads them to a life of freedom. However, that freedom is often overshadowed by   hardships, the likes of which many have never known. The further onto the western fringe they travel, the more important community becomes. Journey to Joseph Martin’s station, Virginia’s final point of rest and resupply, and walk amongst merchants and tradesmen. Meet those individuals who traveled the trace and the indigenous peoples they encountered along their journey. Come and immerse yourself in Virginia: America’s First Frontier.

• The Evolution of Rifled Guns in Colonial America

Throughout the 18th century, the “rifled gun” played a pivotal role in the settlement of Colonial America. From the early transitional era through the golden age, the American Long rifle served as a valued possession. These unique American masterpieces not only served as tools of survival, they perpetuated the idea of independence. Join us as we examine the evolution of the Long rifle and how it became the iconic symbol of the American Frontiersman.

• “The Long Rifle in Virginia”

Cost: Admission to the museum is FREE!

• The Gunmaker’s Art: The Long Rifle and Associated Accessories in Virginia

6. Museum of the Shenandoah Valley