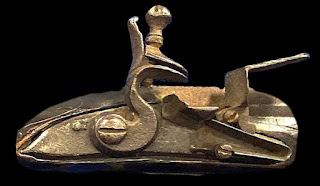 (A preliminary study, to be updated as necessary)

This article is primarily intended to deal with Johannes “John” Rupp the elder gunsmith, not the younger John Rupp - likewise a gunsmith in the same region of Macungie - who was a nephew of the elder man.  I also would like to make it known that this is not intended to be a detailed genealogical study of the Rupp family in any way, as the Macungie Rupps were a prolific family.  When one considers that there were a number of other family groups with many variations of phonetically-similar surnames all over southeastern PA of no relation, and considering that all these people were rapidly producing ‘issue’ and moving around, it becomes almost impossible to render firm or assured statements.  My focus here is constrained to information relative to Johannes Rupp, son of George Rupp Sr., and other family members may only be cursorily mentioned as they relate to the investigation.

A few quick notes: in researching historical individuals, Ancestry.com has become a hot mess.  Yes, I said it.  There may be a hundred different ‘user-provided’ family trees for any given family, most of which have no first-hand period documentation whatsoever, and one can bet that any search is going to turn up all of them.  This questionable information is then disseminated through multiple other Ancestry user databases, contaminating them all like a virus.  The genuine ‘light at the end of the tunnel’ factual information can truly only be found in church records, tax records, census records, estate records etc.  These types of records are all that I am personally willing to trust and to present as facts:  first-hand documentation of the period under investigation.  If I speculate, regardless of how accurate I think I may be, I will always try to ensure that I am presenting it as speculation.

Another wrench in the works has always been the ever-popular ‘county histories’ of the late 19th and early 20th centuries.  These are a trap, providing at the same time both bright beacons of hope or interest as well as dead-ends in abundance.  Beware their siren call!  One might find enough valid or verifiable information therein to entice you into a serene trust, only to subsequently stumble and find yourself down a blind rabbit hole amid a floral word-soup of conflicting, ethereal statements.  See what I did there?  These ‘histories’ are useful as a preliminary sketch and can be valuable in seeking base compass points, but ultimately they should not be taken at face value without tracking down and verifying each perceived lead.  They rarely, if ever, document their sources and the biographical sketches are based almost entirely on family oral history which may be accurate to some extent, or it may not.  It is these county histories which are the vast majority of ‘sources’ for the family trees littering Ancestry.com like stale cigarette butts.

Two of the fairly popular county histories compiled during the late 19th and early 20th centuries present a detailed portrait of the Macungie Rupp family.  There were mentions or entries in other histories as well, most biographies dealing primarily with  later family members, but the two histories I’ve highlighted below seem to be the origin of information presented in the others (more than one having ‘lifted’ some of this information almost verbatim).  A summarization of the relevant portions is as follows:

(1) History of the Counties of Lehigh and Carbon, in the Commonwealth of Pennsylvania…

Page 319 mentions the Rupp’s again and states “The old family Bible, now in the possession of Louis Rupp, one of the descendants, contains the name of Herman Rupp, a son of George, who was born in Macungie, Nov. 7, 1756, and was married to Barbara, daughter of Michael Biery.”

Proceeds to relate the story of George and Ursula Rupp and children, similar to above county history (Lehigh/Carbon).  “The following account is mainly from family and church records.”

“Johannes Rupp, son of George [Sr.], was born July 2, 1762 at Trexlertown, Lehigh County, and died at Philadelphia.  He was a blacksmith by trade.  His children were:  William, Jacob, George and Mary (married Jacob Stein).”

George W. Rupp, the subject of the biographical sketch, was the son of the aforementioned John, so the Johannes Rupp that is the focal point of this article would have been his great grandfather.

The “patriarch” of the Macungie Rupp family is generally accepted as (Johan?) George Rupp Sr., married to Ursula.  The above sources, and most if not all other sources either online or in print, present birth dates for the pair, arrival here immediately post-marriage via immigration around 1750, and the topper is a romantic story of mixed class.  However, thus far, a search of Palatine passenger lists through the port of Philadelphia has not turned up a good match even considering spelling variations.  If someone can provide me with documented background information on this couple, I would be exceedingly happy to see it!  Possibly, they arrived through a different port of entry.

The earliest assessment (taxation) lists of which I’m aware for the county of Northampton are dated September 1, 1761, and here can be found the first verifiable reference to “George Rup” in the list for Macungie township (HSP); he was curiously taxed 2 pounds, followed by a separate entry for 5 pounds of additional tax "for the land he lives on."  I do not currently have an explanation for this although I suspect it may involve some form of split between improved land w/ a house vs. unimproved land, but this is admittedly speculative.  He is likewise present on the list for the next year, 1762 (LCHS) and in 1768, "George Rup" was witness to a mortgage transaction in Macungie (NH Co. Deed book B1).  His tax for that year {1768} in "Macungi" had increased to 20 pounds and was the same for the 1770 assessment as well ("George Rub").  He next appears in relation to a baptism on September 1, 1771 in the records of the Jordan Reformed congregation; George, son of Diephold (Theobald) Fahringer and wife Clara, sponsors George Rupp and wife Ursula.  It is believed that Fahringer’s wife Clara here was the Rupps eldest child, although I have not found any record of this marriage nor record of her birth.  However, circumstances strongly suggest the familial relation especially given that Diephold Fahringer (blacksmith, township of Macungie) died during the War, in Philadelphia, and Herman Rupp was the administrator for his estate (NH Co. Deed book B1).

George Sr. is easy to place thoughout the surviving assessments for Macungie during the 1761-1772 period (HSP), and in the 1772 proprietary tax assessments (PA Archive series) “George Rup” Jr. first appears listed with the single men for Macungie township.  No other Rupp offspring are listed, so this would seem to indicate that the other three Rupp brothers were still underage and George Jr. was the oldest son, rather than Herman, but this is speculative only.  Herman does not turn up in the single men list for Macungie until 1781 (along with brother George Jr.).  On June 22, 1791 George is mentioned in an Orphan’s Court Petition (HSP Orphans Court records Vol. E) and finally, in 1794, George Sr is noted in a deed wherein “George Rup, yeoman, and wife Ursula…” sold to Jacob Shoomacker (Shoemaker, Schumacher) 11 Acres and 50 Perches in Macungie (NH Co. Deed book B2).  I am unclear on the date of Ursula’s death - I can find no verified record of it - however George Rupp’s estate papers have survived and the initial paperwork dates to October 14, 1807.  On that date, ‘Harman’ Rupp appeared before Abraham (Horn?) Register for the Probate of Wills, Northampton County, and declared that George Rupp died without a will, that he (Herman) will administer the estate of the deceased, will pay debts, inventory goods etc. and provide an account to the Register’s Office.  It specifically does note that “Harman Rupp is a son of George” and is signed by Herman Rupp.  These estate papers have proven to be quite informative in the search for Johannes “John” Rupp - more on this a bit later.

The full articles can be found here. We will published more parts daily.